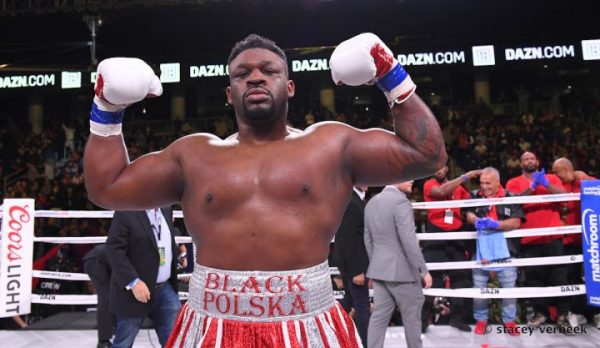 Share
Facebook Twitter LinkedIn Pinterest Email
Jarrell Miller has been given a six-month ban by the WBA after failing three drugs tests before his cancelled fight with Anthony Joshua on June 1.
However, the governing body’s ruling does not actually prevent the heavyweight from fighting, as they do not have that power.
The WBA can merely exclude him from their rankings and prevent him from competing for their titles, which they will do until September 19.
Miller, who tested positive for GW1516, HGH and EPO, cannot receive a proper ban due to a bizarre loophole in the US system.
Following his failed tests, the New York State Athletic Commission refused to licence him for the Joshua bout and so he was pulled from the event.
However, last week promoter Eddie Hearn revealed that the American’s licence with New York had in fact expired, meaning that they do not have the jurisdiction to punish him.
Due to the fact that American boxing works on a State-by-State basis – rather than with one centralised commission like in the UK – he effectively does not have to answer to anyone for his offences and has therefore escaped without a fixed ban.
Reacting to the WBA’s ruling, Miller’s co-promoter Greg Cohen told ESPN: “I think it’s fair… It’s appropriate, and we just look forward to moving on to bigger and better things in the future.”
As part of the resolution, the American will have to register with VADA testing at his own expense and undergo random testing in order to be returned to the rankings in six months’ time.