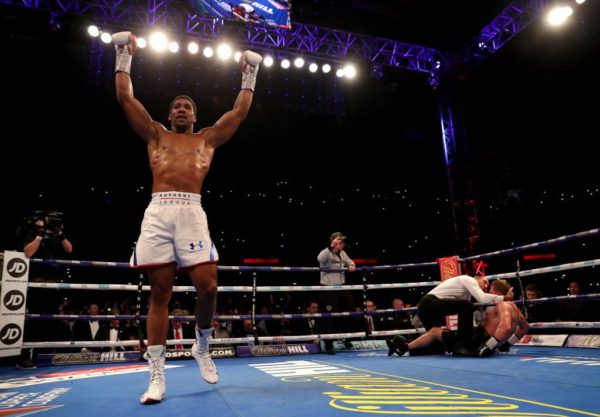 Share
Facebook Twitter LinkedIn Pinterest Email
Ambitions to challenge Anthony Joshua (22-0) is one of the reasons why Oleksandr Usyk (15-0) has agreed to fight Tony Bellew (30-2-1) on November 10 in Manchester, says the Ukrainian fighter.
WBSS winner Usyk and David Haye conqueror Bellew go head to head at the Manchester Arena on November 10 – live on Sky Sports Box Office – when the 31-year-old Ukrainian will defend his four world crusierweight titles in what promoter Eddie Hearn has already labelled as “the fight of 2018”.
Nicknamed “The Cat”, southpaw Usyk has already won twice on English soil – including a gold medal at the London Olympic Games in 2012 – and the undisputed world cruiserweight champion is firm favourite to beat the Liverpudlian hero, who twice trumped ‘The Hayemaker’ against all odds, sending him into retirement.
Unbeaten Usyk is already planning his next fight with AJ, who retained his IBF, WBA and WBO heavyweight titles with a devastating knockout of Alexander Povetkin to move up to 22 fights undefeated.
“One reason we have agreed to fight Bellew is to get to Joshua,” Usyk was quoted. “It is exactly part of the strategy and why we have this co-operation with Eddie Hearn.
“He has Tony, he has Anthony, he has Dillian Whyte and a couple more heavyweights.
“It’s the best way, the shortest – not the easiest – way to fight Anthony.”
Hearn insists Joshua is “100 per cent” focused on fighting WBC world heavyweight champion Deontay Wilder next, and is hopeful a deal can be agreed in the coming weeks.
Alexander Povetkin Anthony Joshua david haye Manchester Arena Oleksandr Usyk Tony Bellew
Share. Facebook Twitter Pinterest LinkedIn Tumblr Telegram Email