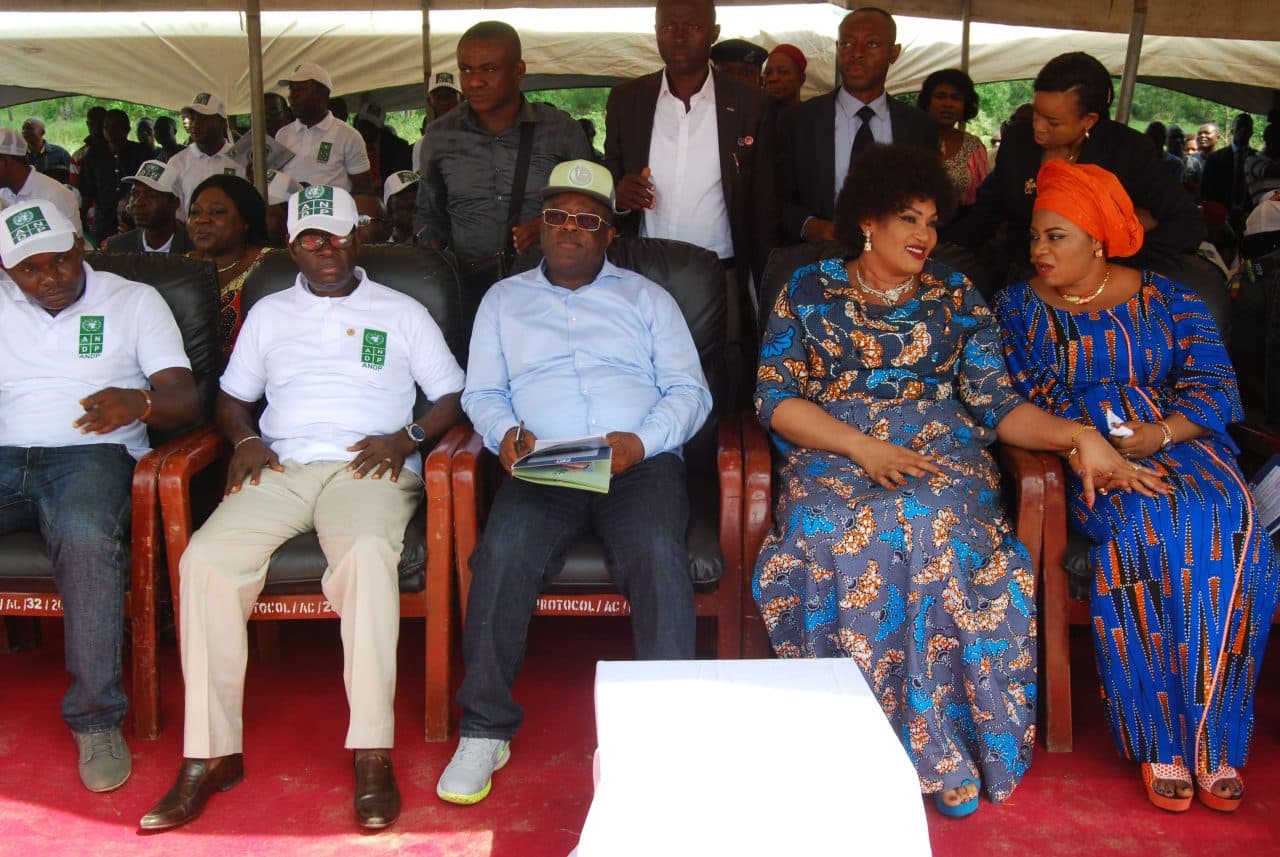 Share
Facebook Twitter LinkedIn Pinterest Email
The Governor of Ebonyi State, Engr. David Nweze Umahi, on Saturday laid the foundation for the 5,000 unit of blocks for less privileged in Umuobuna Etiti Uburu in Ohaozara Local Government Area.
Umahi, at the ceremony, which attracted members of the State Executive Council, traditional rulers, businessmen youths and many others, thanked the initiators of the project, Africa Nations Development Programme, for considering Ebonyi State.
The governor added that a similar project would take place in Izzi Local Government Area and enjoined the people to release their land for such development.
Umahi, who headed straight to the venue of the ceremony from his working visit to Abuja, also said his administration and the Bank of Industry have planned to deposit N2 billion each to fund small scale industries.
The governor, in a statement on Sunday by his Chief Press Secretary, Emma Anya,  noted that the aim was to enable people engage in productive ventures.
He explained that the money would be made available for any group of people in the state with viable projects.
His words: “We have concluded discussion with the Bank of Industry and what the BoI is   funding small scale industries and programmes.
“We have offered to deposit in a common account the sum of N2 billion and the bank  will add their own N2 billion.
“With this, any group of persons or cooperative that comes up with viable project today, they will draw from this fund.
“It doesn’t matter if the entire fund is spent in one LGA.
“It’s going to be first come first served.
“This is an incentive to draw our people out to begin to do things with their hands.”
The governor said that efforts were on to settle for investors interested in the development of limestone and salt in the state.
Umahi disclosed that a multi-national cement company, Larfage, was at the final stage of establishing the biggest cement factory in the country in Ebonyi LGA.
He said: “We have also spoken to about three investors that are very much interested in our salt and limestone and it’s our that Nigercem in Nkalagu will very soon resume production.
“We’re also working with Larfage to develop the biggest cement factory in the whole of Nigeria at Ebonyi LGA.
“They’re at the final stage of doing this.”
While the governor appreciated the ANDP for the project, he announced that the 2km road requested by the organisation would be constructed.
Umahi said: “Your Excellency, Ambassador Samson Omojuyigbe, we want to thank you very much and we will give you all the support.
“Presently, we have very good road network around this location and the only request you made, which is about two kilometres of road, the moment you start construction, we will do the road to encourage you.”
Earlier, Omojuyigbe, the Director General of the ANDP, said the new city would on  completion alleviate the suffering of the less privileged and guarantee decent life for the coming generation.
On his part, the Country Director, Ifeanyichukwu Eze, said the housing project would  comprise 5,000 detached two bedroom bungalows and other facilities such as schools, water, electricity, police station, barracks, hospitals among others.
Eze stated    that the occupants would be trained and empowered to enable them have standard means of livelihood.
In their separate remarks, the Chairman of Ohaozara LGA, Nkechinyere Iyioku, and the Commissioner for Lands, Chief Sunday Inyima, commended Governor Umahi for attracting the project to the area.
Ambassador Samson Omojuyigbe Ebonyi State Governor David Umahi Ohaozara Local Government Area
Share. Facebook Twitter Pinterest LinkedIn Tumblr Email