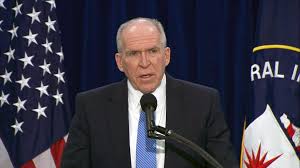 Four hours after three suicide bombers killed at least 41 people and wounded hundreds more at Istanbul’s Ataturk airport, CIA Director John Brennan said the attacks bore the grim hallmarks of ISIS and warned that the fanatically violent Islamic terrorist group wants to conduct similar large-scale attacks in the United States.
“I am worried from the standpoint of an intelligence professional who looks at the capabilities of Daesh … and their determination to kill as many as people as possible and to carry out attacks abroad,” Brennan said in an exclusive interview at CIA headquarters with Yahoo News.
Brennan credited effective homeland security measures and intelligence for the fact that ISIS has been unable to attack America directly — the Orlando and San Bernardino shootings were carried out by radicals inspired by ISIS but not under its control — but he believes the group will keep trying to penetrate American defencees.
“You look at what happened in the Turkish airport, these were suicide vests. It’s not that difficult to actually construct and fabricate a suicide vest … so if you have a determined enemy and individuals who are not concerned about escape, that they are going into it with a sense that they are going to die, that really does complicate your strategy in terms of preventing attacks.”
He added: “I’d be surprised if Daesh is not trying to carry out that kind of attack in the United States.” Daesh is an acronym for the Arabic name of the Islamic State, better known as ISIS or ISIL.
Without confirming that the airport bombings were carried out by ISIS, which as of Wednesday morning had not claimed responsibility, Brennan indicated that the method of attack — suicide bombers wearing explosives-laden vests — pointed to the Islamic extremist group rather than to Kurdish nationalists, who have been waging a campaign of violence against the Turkish state. “It was a suicide bombing [which] is usually more a Daesh technique,” Brennan said.
Moreover, Brennan said that ISIS has a motive to spread its terror to Turkey, which has been targeting ISIS terrorists across the border in Syria. Until recently, Ankara’s failure to police its border with Syria was a sore point with Washington. “Turkey has been cracking down on some of the transit of foreign fighters who are flowing into, as well as out of, Turkey, and they are part of part of the coalition providing support, allowing their territory to be used by coalition aircraft, so there are a lot of reasons why Daesh would want to strike back.”
Brennan said ISIS is using terror tactics to “offset” tactical battlefield setbacks and losses of territory in Syria and Iraq. But he was quick to add that the wider offensive in the region and Europe and beyond is “not solely” a reaction to losses in Iraq and Syria. “Over the past year and a half they have made a more determined effort to carry out attacks abroad, and we see in terms of their plans, their preparations, the movement of people as well as propagandizing outside, exhorting, inciting a much more determined effort to carry out these external operations,” Brennan said.
In the interview, Brennan was blunt about the slow nature of progress both in the fight against ISIS and efforts to push Syrian President Bashar Assad out of power. He echoed somewhat pessimistic comments he made earlier this month before the Senate Intelligence Committee about the enduring strength of ISIS as a terrorist organization with global reach. “We’ve yet to really thwart Daesh’s ability to reach beyond the Syria-Iraqi borders and put in place some of the plans and preparations to carry out attacks,” Brennan said. He added, “I am very concerned we have not had the success against Daesh in that environment as we’ve had in the core areas of Syria and Iraq.”
A key prong of U.S. strategy to defeat ISIS is the removal of Assad, whom Brennan described as a “magnet” for a wide spectrum of extremist groups in Syria. But the CIA chief acknowledged that Assad is getting stronger rather than weaker. “Relative to where he was on the battlefield last year, [Assad] is in a better and stronger position [today],” he said. For that he blames Russia, which intervened last September to prop up its flagging client with thousands of troops and sophisticated weaponry. Frustrated with Moscow, Brennan said, “The Russians sometimes want their cake and eat it too as far as having the cooperation with us against terrorists but not wanting to do anything that’s going to lead to a political settlement that will have a more durable future as a far as a political agreement.”
Yahoo News.