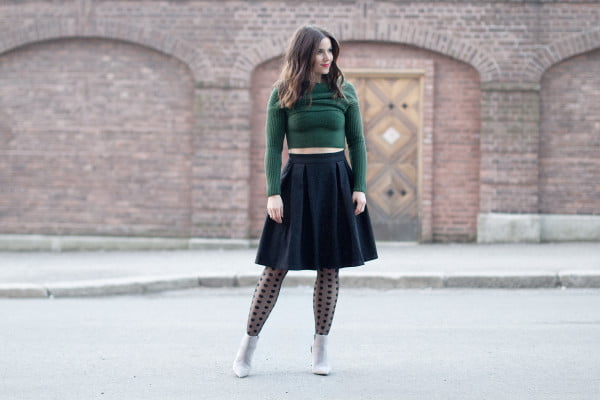 If there is a trend you definitely don’t want to miss this season, it’s a pleated skirt. Yes, this bottom piece is back in style, and surprisingly making waves.
According to Google, in 1909, fashion designer Mariano Fortuny created the Greek-inspired Delphos dress. Made of silk satin, it stood out not only for its impeccable lines but also its delicate pleats.
In addition to being an iconic design, it is considered to be the first one to incorporate the technique of repeatedly folding the fabric in the same direction to achieve the characteristic pleats that give it that inimitable style.
Although pleats date back as far as the early 70s, there seems to be a comeback for pleats skirts as it evolves with time. Pleated skirts rule once more and its unexplainable stands out because of its classic nature.
Wikipedia defines “Pleat” generally as a type of fold formed by doubling fabric back upon itself and securing it in place. There are different types of pleated skirts, like the Box pleats, Regular Pleats, Kick Pleats, Inverted Pleats, Knife Pleats, and accordion Pleats.
Pleats skirt is a skirt with fullness reduced to fit the waist by means of regular pleats ‘plaits’ or folds, which can be stitched flat to hip-level or free-hanging.
Fashion designers recommend pleated skirt to match amazingly with a silk top or cotton depending on the material. The skirt is said to be better tucked in or worn loosed.
Uche James, a dress maker, told the News Agency of Nigeria that till date, she still loves the pleated Zara skirt she got in 2013, especially as the fashion piece has made a major comeback as 2019 draws to a close.
James said: “I would like to say that I am very proud of myself for holding on to a pleated leather Zara skirt I bought back in 2013.
“I knew that thing was special when I first laid eyes on it. Six years later, pleated skirts are making a major comeback.”
James, however, said it was a bit difficult to put pleating together as it needs lots of concentration, adding that the hard work is worth it at the end when the beauty of the pleats show.
She said: “Truthfully, it is sometimes difficult to make a pleated dress but trust me, if you put your mind while you are at it, the result would leave you in shock.”
People are really in no doubts blending the pleated skirts as some feel the weather this winter is a perfect match for the season.
Style enthusiast, Sandra Fehintola, shared similar thoughts.
“I think the weather is harsh due to the season, the dust, dryness of the body, is best covered with long skirts, but I personally prefer wearing the pleated skirts, because it is classic, handy, smarter, and really in vogue,” Fehintola said.
Susan Freeman, American textile technologist, says that Pleats are usually applied for decorative effect, but are also used to shorten the length of a piece of fabric.
Pleats and gathers have some similarities which boils down to the fact that “pleats” and gathers are commonly used at the bottom of skirts and other garments, while “gathers” are used at the top.
Gathers on the other hand, are a row of small folds made by sewing small stitches of thread through a fabric and then pulling the thread tight.
NAN also spoke with Jane Omale who seems to find pleasure in wearing pleated skirts.
She said: “I really like pleated skirts not just because of its unique nature, but because of the comfort that comes with it.”
It is no news that apart from pleated skirts being able to emphasise one’s waist, it is surprisingly easy to make and maintain. Thin hips figures also benefit from this skirt as it adds some curves to their smaller figure.
A fashion designer, Joy Alfred, said she recommends pleated skirts for slim people.
According to her: I recommend pleated skirts to people who are slim, as plus size figure looks voluminous in it.”
Another dress maker, Peace Stephen, said apart from being a dress maker, she enjoys wearing pleated skirts herself. She said: “Apart from being a tailor, I really like doing pleated skirts, though it was somewhat not on trend at some point, as patronage became poor.
“I knew that it would come back, and it is indeed back again, pleated skirts are my favourite.”
Jesmiel Rachael, a secondary school student, said she really enjoys pressing her uniforms because of its unique pleated lines.
Jessica Egbo, however, has a different view of pleated skirts as she feels it is somewhat religiously inclined. Egbo said: “For me, I feel it is some churches that really wear the pleated skirts, but now it is trending and it depends on the way you combine it that brings out the beauty.”
Vivian Orji, a school owner, prefers pleated skirts for her female students because of its comfort.
“To me, it doesn’t bring out much shape of the girls, it is really decent I mean you can always put the fabric in between your laps and feel free and it makes them look smarter.”
NAN reports that celebrities like Toke Makinwa and Linda Ikeji, Jackie Appiah and others have been seen leading the return of the pleated skirts.
They have found creative ways to pair these pleats with amazing fashion pieces.
Dior, Joseph and Valentino are just a few of the fashion houses bringing pleated skirts back, especially in midi-length, high-waist and medium-volume.
NAN.