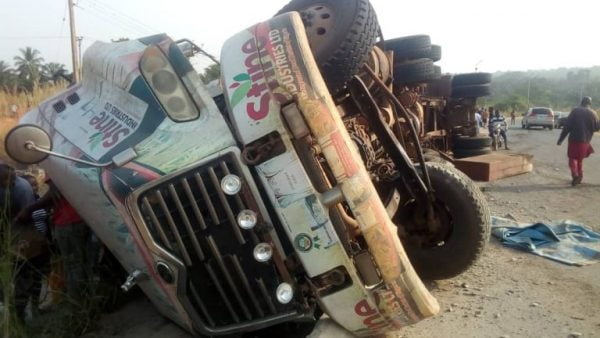 Seven persons died while five others sustained injuries on Friday in an accident involving a Mazda bus and a truck at Ogunmakin on the Lagos-Ibadan Expressway.

He blamed the accident on excessive speeding and loss of control by the bus driver, which made him to ram into the moving truck ahead of him.

He said: “A total 16 persons, 15 of them male adults, were involved in the accident.

“Five men were injured, while six men and one woman died in the mishap.”

Umar told newsmen that the injured victims were taken to Victory Hospital, Ogere, Ogun State for medical treatment, while the deceased were deposited at FOS morgue in Ipara, also in Ogun State.

The Sector Commander described the crash as avoidable if the bus driver had not sped excessively on the slippery highway as it was raining at the time of the accident.

Umar commiserated with the families of the crash victims and also enjoined them to contact the FRSC Command in Ogunmakin area for details and reclaim the belongings of the victims recovered from the scene.