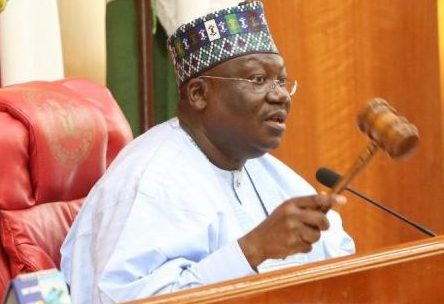 The President of the Senate, Dr. Ahmad Lawan, has reacted to a report in a video that he has defected to the Peoples Democratic Party from the All Progressives Congress.

The video went into circulation on Friday hours before the APC submitted his name as the candidate of Yobe North Senatorial District to the Independent National Electoral Commission.

There had been a face-off between Lawan and the winner of the primaries of the APC for Yobe North Senatorial District, Bashir Manchina.

After the president of the Senate lost his bid for the presidential ticket of the party to Asiwaju Bola Ahmed Tinubu, Manchina refused to hand over the party’s ticket to him.

This, perhaps, led to the release of the video, which The Eagle Online observed, was manipulated.

It was an earlier recording in the Senate Chamber.

Reacting to the development in a statement by his Special Adviser on Media, Ola Awoniyi, Lawan said it was a mischief.

The statement said: “We have seen on the social media a video clip in which the President of the Senate, Ahmad Lawan, purportedly announced his defection from the ruling All Progressives Congress(APC) to the Peoples Democratic Party(PDP).

“The original video clip, which was mischievously edited to 26 secs, is a 3mins 30secs clip of the Senate President reading the letter by His Excellency, Senator Muhammad Adamu Ailero of Kebbi State, informing his Distinguished senator colleagues at plenary of his defection from the APC to the PDP over issues in the state chapter of the APC.

“It is common knowledge that the Senate resumed from a recess on Tuesday and adjourned sitting on Wednesday to next Tuesday.

“So how could the Senate President have made such announcement at plenary either on Tuesday or Wednesday without it being reported by journalists who covered the proceedings?

“The fact is that, at the commencement of the session on Tuesday, the Senate President read out some correspondences, one of which was the said letter written by Senator Aliero.

“Senator Aliero was not the only senator that officially announced his defection this week from one party to another.

“It was the video clip of the Senate President reading out Senator Aliero’s letter that was doctored to give the wrong impression that Lawan has renounced his membership of APC.

“For the avoidance of doubt, Senator Ahmad Lawan is a committed member of the APC and has no reason whatsoever to renounce his membership of the party.

“Members of the public are hereby enjoined to discountenance the video in reference as it is the handiwork of mischief makers.”