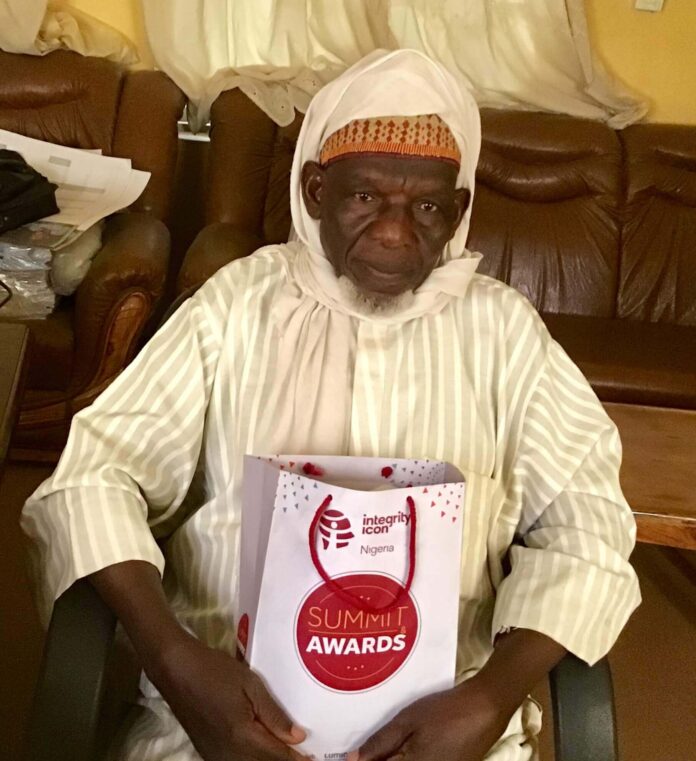 Malam Abubakar Garba, a pensioner in Bauchi State who returned N1 million excess gratuity paid to him, has commended an Abuja-based Non-Governmental Organisation, Accountability Lab. Nigeria, for honouring him with an award of “Champion of Integrity”.
Garba, who gave the commendation in Bauchi during an interview with News Agency of Nigeria on Friday, said the recognition by the organization had excited him and would encourage others to exhibit similar honesty in future.
He said: “It is not always money that matters, but recognition in appreciation of sacrifice made by people; I could have gone home quietly with the excess money and it probably would not have been detected.
“However, my decision to satisfy my conscience was my ultimate goal and any recognition by whatever quarters will serve the purpose of eliciting similar behaviour from others.”
NAN recalls that Garba, 71, a Motor Chief Driver with the Bauchi State Judiciary who retired in 2011, was on August 5, 2019, erroneously paid N1.2 million as balance of his gratuity instead of N200,000.
Upon getting to the bank and discovering the amount on the cheque given to him, he returned it (cheque) to the disbursement committee and was issued another cheque of N200,000.
He had told NAN in an exclusive interview at that time that he never “thought twice” before returning the cheque.
Garba said: “My entitlement was N1.2, million but I had been paid N1 million some years back, leaving a balance of N200,000.
“When the new regime decided to settle arrears of pension and I was lucky to be considered,I was given a cheque of N1.2 million again.
“I did not realise the mistake until I went to the bank and started filling the teller to lodge the money into my account.
“I promptly returned the cheque, to the surprise and amazement of members of the committee.”
Garba had said he was in dire need of money to complete the building of his house and repair his only car, but the satisfaction of his conscience was more paramount than his needs.
He said: “As I am talking to you now, I need N1.5 million to complete my house; I need N300,000 to resuscitate my car that had been grounded for two years.
“I had been looking for a bank that will grant me loan, without any success, yet I returned the money.
Garba, who has one wife and seven children, said most people who heard the story were astonished, with some saying he was probably “scared of EFCC”, “had no financial challenges” or “too old to value money.”
Speaking to NAN in a telephone interview, Odeh Friday, Country Director of Accountability Lab, Nigeria, said the Bauchi pensioner was among five others honoured by his organization on Tuesday in Abuja.
Friday said: “We run a Programme called ‘integrity icon’ to name and fame honest civil servants.
“However, we also celebrate civilians who we call ‘Champions of Integrity’ and he (Garba) is one of them.”
Meanwhile, some people in Bauchi have expressed disappointment that such rare display of honesty was never recognised in the state.
The respondents, who did not want their names in print, wondered why none of the numerous Non-Governmental Organisations in Bauchi State or the authorities deemed it fit to recognise the exemplary behaviour of Garba.
A pensioner said: “It is highly unfortunate that such rare display of honesty in this hard times is never considered something worthy of recognition and celebration in the state.
“One million Naira is no small money, but for the media and the Abuja NGO, the exemplary behaviour would have gone unnoticed.
“The message passed by such non-recognition is that honesty and transparency have no place or value here; I will be the last person to return such money should I encounter same experience.”
Another respondent cited as an example of positive response, the case of an Air Force personnel that found and returned money at pilgrims camp in Kano last year, saying the Federal Government amply recognised, appreciated and rewarded not only the key actor, but his parents that trained him.
The respondent said: “President Buhari and the Nigeria Air Force hosted him and his parents.
“He was an instant hero and Nigerians are more likely to emulate him.
“That is what one would have expected the authorities in Bauchi to do to the pensioner.
“Garba’s exemplary character should have been used to launder the image of the state in this era of greed and corruption.
“Unfortunately, the opportunity was wasted, and, in the process, sending a wrong signal.”
NAN.