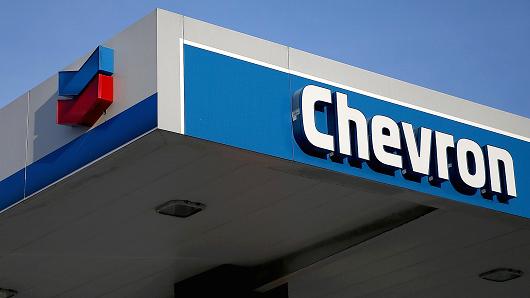 Share
Facebook Twitter LinkedIn Pinterest Email
Oil and gas workers unions are threatening industrial action over alleged plans by the management of Chevron to circumvent labour contract guidelines to sack thousands of its workers.
The national leadership of Nigeria Union of Petroleum and Natural Gas Workers and the Petroleum and Natural Gas Senior Association on Friday expressed concern over what it called looming mass job loses.
The unions said they were concerned about the manner in which the Chevron management was executing the end of M15 and H15 contracts.
They alleged that the agreements were “laced with hidden plans and intentions to unilaterally and heinously sack thousands of contract workers.”
But Esimaje Brikinn, the General Manager, Policymakers, Government and Public Affairs, Chevron Nigeria Limited, said the firm was committed to workers’ welfare and the growth of the nation’s economy.
Brikinn said in a text message to the News Agency of Nigeria: “Chevron Nigeria Ltd, operator of the NNPC/CNL Joint Venture, confirms that the existing contracts of all its manpower services providers will expire by end of October, 2018.
“The expiring contracts are being replaced with new manpower services contracts, which have been awarded in accordance with the open tender process conducted by the NNPC/CNL Joint Venture in accordance with its standard procedures, the requirements of the National Petroleum Investment and Management Services (NAPIMS), a subsidiary of NNPC, and requirements of the Nigerian Content Development and Monitoring Board (NCDMB).
“CNL is already executing the contracts with the successful contractors.
“CNL reiterates its commitment to support the economic development of Nigeria through its strategic investments and economic development programmes.”
The unions said: “At this juncture, we are further constrained to notify the general public that NUPENG and PENGASSAN will not hesitate to embark on a nationwide industrial action on this matter.
“We have already placed our members on red-alert should the management of Chevron remain recalcitrant or adamant to rescind its anti-labour decision which is grossly injurious to Nigerian workers.”
The unions said in a statement that Chevron had continued its plan to implement the anti-workers policy in spite of ongoing mediation by Federal Ministry of Labour and Employment and established Labour Contract Staffing Guidelines in the oil and gas industry.
The statement was signed by Lumumba Okugbawa, PENGASSAN General Secretary, and Adamu Song, NUPENG General Secretary.
Iy added: “While Chevron had decided to close M-15 and H-15 contracts by 31st October, 2018, it is really disturbing to see the new contractors being engaged by Chevron management and whose labour contract will take effect on November 1, 2018, to start advertising all jobs.
“In spite of clear provision for ‘roll over’ of the existing workers on the jobs, consequent upon which large numbers of the current workforce are most likely to be abruptly thrown into the Labour market in their own country.
“The leaderships of the two unions in the oil and gas industry see such arrangement as cruel, callous and by all standards an affront on the Nigerian constituted authority and industry extant rules.
“Without sounding immodest, it has now become quite glaring that Chevron Management is flippantly overstretching the good intentions of the unions (NUPENG & PENGASSAN-NUPENGASSAN) to entrench peaceful and harmonious industrial relations particularly at a critical time like this when the country is approaching an election year.
“Without mincing words, we are deeply bothered by the purported claims being peddled around by Chevron management that their action of sacking Nigerian workers is a directive from National Petroleum Investment Management Services (NAPPIMS) and the Nigeria Contents Monitoring and Development Board (NCMDB).
“We then begin to wonder if the role of these reputable government agencies is to create jobs for Nigerians or to compound unemployment situation as already prevalent in the country.”
They appealed to the National Assembly, the Federal Ministry of Petroleum Resources, the Nigerian National Petroleum Corporation and the Department of State Services to wade into the matter without further delay.
The oil and gas workers also appealed to other stakeholders to prevail on the oil giant to exercise restraint by ensuring a “smooth transition into the new contract circle by adhering to the guidelines which provide for ‘roll over’ of workers.”
NAN.
Chevron Nigeria Union of Petroleum and Natural Gas Workers
Share. Facebook Twitter Pinterest LinkedIn Tumblr Telegram Email