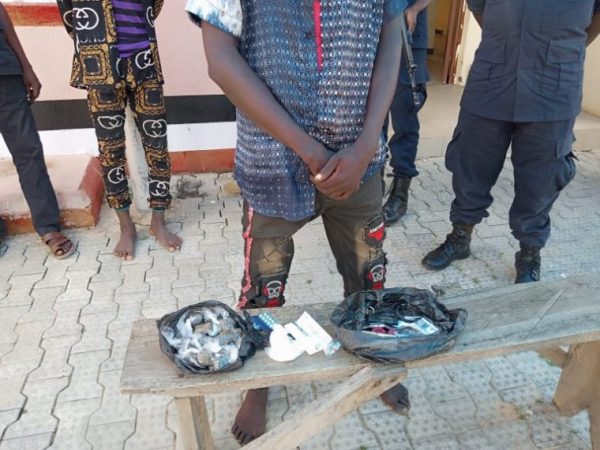 The Katsina State Command, Nigeria Security and Civil Defence Corps (NSCDC),  said it had arrested a suspected cattle rustler and a drug dealer in the state.

The Public Relations Officer of the command, DSC Muhammed Tukur, said this while briefing newsmen on Wednesday in Katsina over the development.

According to him, one of the suspects, a 20-year-old man, resident of Maikaho Village, Jibia Local Government Area (LGA), was accused of cattle rustling and aiding bandits.

Tukur said, “This suspect was arrested by members of a vigilance group in Maikaho Village accusing him of aiding bandits, involvement in rustling, among other alleged offences.

“The vigilantes handed him over to NSCDC and during interrogation, the suspect confirmed to us that he was forced by a gang of rustlers to rustle more than 10 cows and other animals.

“Although he denied being involved in banditry, he confirmed that he was contacted by a group of bandits to go out for an operation, but he refused.

“He revealed to us that he later heard that the group had kidnapped three people in Falale Village where he was invited to go for the operation, and later he was given an AK-47 rifle to keep for them.”

According to the NSCDC’s spokesman, the command is still investigating the issue and at the end, the suspect will be charged to court.

“The second suspect, a 29-year-old man, a resident of Yangora in Bindawa LGA), was arrested in possession of cannabis sativa (India hemp) and other illegal substances.

He said that he was into the business of selling used clothes and other things in Abia, but would normally return home annually for farming.

“I wish to inform you that immediately after this briefing, we are going to hand over the suspect to National Drug Law Enforcement Agency (NDLEA) for further investigation,” he said.

Responding to questions from newsmen, both suspects admitted that they committed the offences.

The suspected cattle rustler, however, insisted that he was not involved in kidnapping.