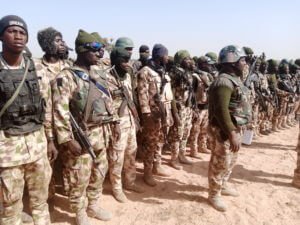 PRNigeria gathered that the joint security operatives laid an ambush for the bandits, who were fleeing the ongoing military operations in neighbouring Zamfara State.

A source involved in the operation told PRNigeria that during the gun duel, a soldier was killed while another sustained injury.

“The troops got credible intelligence on the movement of the bandits toward Alawa.

“They were escaping from military onslaught in forests of neighbouring Zamfara and we engaged them at Manganda Junction. At least 42 bandits were killed, as the rest escaped with serious wounds.

“We lost a soldier, while other team members who sustained injury have been taken to Asmau Hospital in Kagara.

“We also recovered sophisticated weapons, motorcycles and herds of cattle from the bandits during the operation,” he revealed.

Meanwhile, stakeholders in Shiroro have sought permanent solution to the influx of fleeing bandits in their area.

Some community leaders have reported that bandits fleeing Zamfara were seen on motorcycles with masked faces.

“The military operation going on in Zamfara needs to be well coordinated and replicated in other border states, so as to save the vulnerably proximitous state from bearing the brunt of the operation,” they said.

A spokesperson for the Coalition of Shiroro Associations (COSA), Salis M Sabo, called on security agencies to swiftly intervene and wipe the cries of the people of Shiroro.