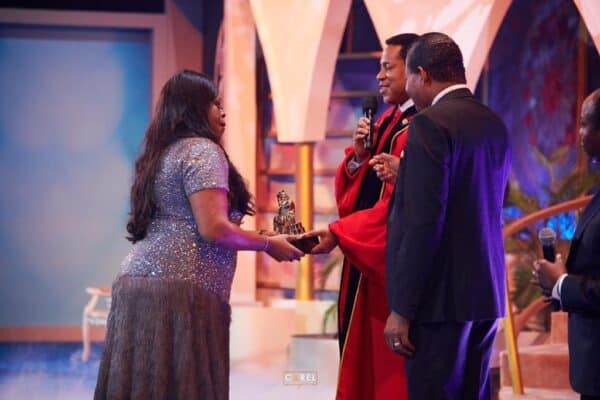 The much anticipated Loveworld International Music and Arts Awards 2019, which took place on Sunday night at the Loveworld Convocation Arena in Lagos, will go down in history as the biggest gospel music and arts awards globally.
It went beyond expectations in every ramification from organisation to attendance to crowd control and the entire ambience reflects a well detailed and perfectly executed ceremony, one that observers attest of having not seen such of its kind in this part of the world.
Attendees were treated to ethereal songs from great talents like Testimony Jaga, Joe Praize, Loveworld UK Band, Sinach, Samsong, Eben Frank Edward and many other talented gospel music artists gave awesome renditions and performances that literally set the huge auditorium on fire and would definitely be talked about for weeks and years to come.
Aside from logistics, security, crowd response, lightening and sound systems that were all top notch, another evidence that manifests the excellence of which the Loveworld nation is well known is the award presentations which were accompanied by some of the most innovative high-tech stage ambience that compares the Grammy’s with songs that were as hot and sizzling as they were spiritually edifying.
It was indeed a very amazing and highly electrifying event with the added impetus of highly encouraging cash backed prizes.
The event, which was televised live on national networks and different international cable channels, is said to have attracted a viewership of over 250 million people across 100 countries of the world.
This is aside those who watched it via social media platforms like Facebook and YouTube among other channels.
Speaking on the importance of the LIMAA and the efforts of Loveworld nation to revolutionalise gospel music around the world, the Media Director of the Ministry, Pastor Tony Ikeokwu, said: “We believe that if you give people opportunities to express themselves, they will excel and because we feel we have limited opportunities available to our artists to be celebrated outside as gospel music ministers, so we instituted the LIMA Awards to recognize and honour our own.”
LIMAA was created in 2016 by the President of The Loveworld Inc. (Christ Embassy), Dr. Chris Oyakhilome, as a platform to recognize the efforts and talents of gospel music ministers in the Ministry and encourage them by cash backed rewards to enable them do more and also compete internationally.
With heightened expectations, the Song of the Year went to Sinach with a cash backed prize of $100,000, while the Artist of the Year went to Testimony Jaga, who couldn’t hold back his joy spoke in tears narrating his life tales on the street before he found salvation in Jesus Christ and comfort in the Loveworld nation.
He got a cash backed prize of $25,000.

Was is all about Meghan, the witch of Windsor?, by Azu...