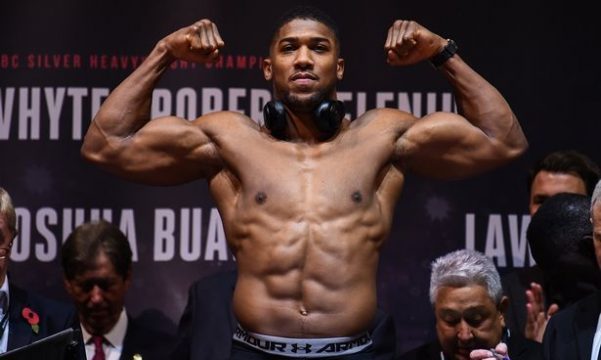 Anthony Joshua looks slimmer than he has ever done ahead of his highly-anticipated rematch with Andy Ruiz Jr.
The heavyweight lost his WBA, IBF and WBO heavyweight titles to the Mexican in one of boxing’s greatest ever shocks in June and will fight to win them back in Saudi Arabia next Saturday.
Ahead of the bout, Joshua has shared an image of himself on Instagram looking totally transformed compared to his shape during that disastrous night in New York.
In the aftermath of his first loss, many fans have compared images of the former world champion to those of him during the contest.
And Joshua explained his decision to change his physique back in September when a journalist told the Brit he looked lighter.
The boxer said: “More boxing focused. More boxing focused, muscle memory and stuff like that…
“Even though it’s a short amount of time, that’s why you’ve said I’ve trimmed down.
“Nothing else was more important to me in these three months than sharpening the tools that I left out of the box.
“Rather than just coming in strong and fit.”
And his opponent, Ruiz Jr, also looks like he’s shed some weight ahead of the fight.
Much was made of his weight before the first fight, as he appeared rotund coming in as a late replacement and professing his love for Snickers.
Ruiz Jr weighed in at 268lbs before knocking Joshua out, but is hoping to be around a stone lighter this time.
“I will arrive in better condition. Lighter, faster and more powerful. They will believe that in December they will win,” the champion told ESPN Mexico.
“People will always talk, but I have faith that we’re going to win and shut up more mouths.”