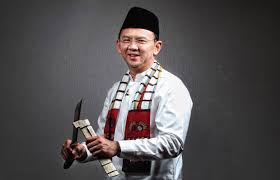 The Christian Governor of the Indonesian capital went on trial on Tuesday to face charges of blasphemy over remarks perceived as insulting to Muslims.
The trial of the Governor, Basuki Purnama, followed a wave of protests by conservative Muslims demanding his prosecution.
According to the indictment read out by prosecutors, Purnama is accused of “publicly expressing hostility to, abusing and disparaging” a religion, a crime punishable by up to five years in prison.
Security was tight for the trial at the North Jakarta district court and hundreds of conservative Muslims dressed in white gathered outside to demand Purnama be jailed.
Purnama said: “I understand the charges but I don’t understand why I’m being accused of blasphemy.”
Purnama said as a Christian politician running for office in a Muslim-majority country, he had been unfairly attacked by political opponents because of his faith.
Purnama said in tears: “They abuse holy verses to achieve their political goals, because they can’t compete in terms of programmes and personal integrity.”
Under Indonesian law, a defendant does not have to enter a plea at the start of a trial.
The blasphemy allegations stem from remarks made by Purnama in September, when he said his opponents had used a verse from the Koran to deceive voters.
In a gathering with residents, he said that they did not have to vote for him in the upcoming February 15 gubernatorial election if they were afraid of going to hell because they “have been lied to using Surah Al-Maidah verse 51”.
Some Muslims interpret the Koranic text in question as prohibiting them from electing non-Muslims as their leaders, although other Muslims disagree that Purnama’s remarks were blasphemous.
Tensions have risen in Jakarta after more than 100,000 Muslims rallied on November 4 demanding the prosecution of Purnama, who is a member of the ethnic Chinese minority.
A second anti-Purnama rally on December 2 was attended by more than 200,000.
Purnama became Jakarta’s first Christian governor in 50 years when he took over from Joko Widodo, now Indonesia’s president, in 2014.
Joko, an ally of Purnama, has accused “political actors” of exploiting anger over Purnama’s remarks to undermine his government.
Purnama’s ascension to the top job in the city teeming with 10 million people had been hailed as an example of Indonesia’s embrace of democracy and diversity.
Hard line groups such as the Islamic Defenders’ Front have always been critical of Purnama, but their past protests against the governor failed to gain strong support, until his remarks on the Koran hit a nerve with many Muslims.
Purnama is known for his strong stance against corruption and being an effective administrator in a bureaucracy that has long been plagued by corruption and incompetence.
Before the blasphemy case, polls consistently showed him leading in the race for the governorship.
However, more recent polls showed his numbers had dropped significantly, putting him second in a three-way race.
Purnama has also made enemies along the way, including officials and members of the city council who he criticised publicly, suggesting that they are incompetent and corrupt.
As part of his urban renewal programmes, he forcefully evicted squatters and slum dwellers, and relocated them to apartments where they have to pay rent and are far from their livelihoods.