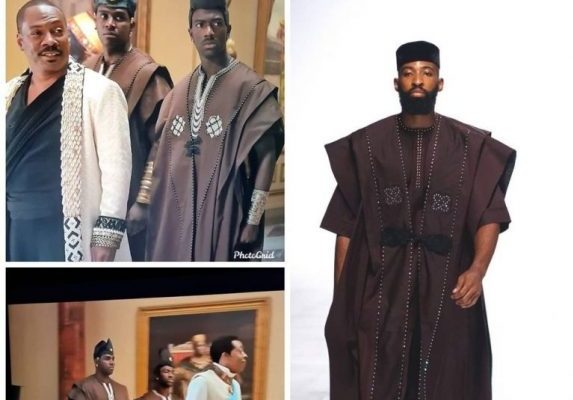 Nigerian designer, Ugo Monye, has called out the producers of the Eddie Murphy-led film “Coming 2 America” for featuring his designs without authorisation.

The News Agency of Nigeria reports that in one of the scenes, a character is seen wearing a replica of Monye’s deconstructed “Agbada” design, which was the cause of a media buzz in 2017.

The agbada, called the Reale Design, was worn by media personality, Ebuka Obi-Uchendu, to the wedding of Adesua and Banky Wellington.

The agbada sparked conversations and brought Monye into further limelight.

In April, Monye had called out the filmmakers for using the design without his permission on his Instagram page @ugo.monyeofficial.

Fans rallied their support and advised him to sue.

However, on Thursday, via his official social media handles, he issued a “Commercial Notice Of The Infringement Of The Reale Design Owned By Ugo Monye Limited In The Movie Coming 2 America.”

In his statement, he said: “The Reale Design has been registered at the Patents and Design registry in Nigeria.

“It features a kimono and less bulky concept of the Nigerian agbada attire and was first showcased on November 19, 2017.”

UML has sold a significant number of the Reale collection in various other countries and has showcased the same at various fashion weeks and runways.

“All our brands and designs including (the Reale Design) and creations are protected by the Copyright Act, Trademark Act and other Nigerian penal laws and international treaties.

“It has come to our attention that our registered Reale Design was reproduced and registered in the movie Coming to America 2 without UML’s authorisation,” he wrote.

Monye added that the filmmakers, including the executive producer, Eddie Murphy, and production company Paramount Pictures, through the costume designer, Ruth E. Carter commissioned some tailors and designers in Nigeria to produce some costumes for the movie that are an infringement of UML’s design.

Meanwhile, Carter, who also was in charge of costumes for ‘Black Panther’ said in an interview that she created her own pieces and also worked with more than three dozen designers and brands on custom looks.

“A cast in itself, this array of designers is based everywhere from Nigeria (House of Deola) and South Africa (Mantsho, which did a 2019 collaboration with H&M) to India (designer JJ Valaya) and the United States,” The Hollywood Reporter said in its report about Carter.

Monye stated that UML is “currently taking actions to ensure that this infringement ceases and is remedied.

“In addition to protecting our business and goodwill, we believe it is high time we took a stand against cultural appropriation; non-Africans continuing to profit off African culture unauthorised,” he added.