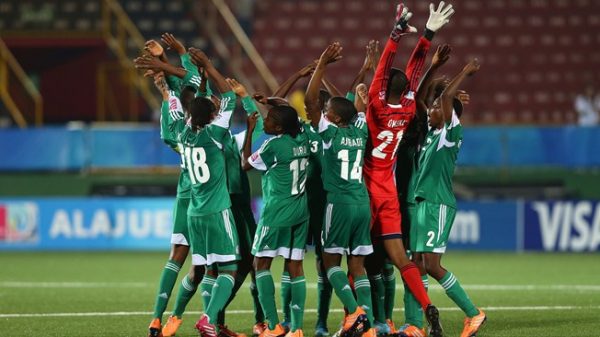 Nigeria’s U17 girls, Flamingos ran riot round their hosts, DR Congo and earned a 3-0 victory in their FIFA U17 Women’s World Cup second round, first leg encounter in Kinshasa on Sunday.

The three-time World Cup quarterfinalists started the game like a house on fire, and dominated the hosts to such a degree that it was a surprise the opening goal did not come until the 36th minute.

Defender Miracle Usani drove the ball forward and pulled out for Blessing Emmanuel to score the Flamingos’ first goal of the day.

There were near misses and shunned penalty appeals, so there were no more goals as the first half ended 1-0 in favour of Nigeria.

In the second half, the Flamingos blasted a couple of free-kicks against the wall and goalkeeper Faith Omilana ensured there was no silver lining for the home team.

In the 63rd minute, Coach Bankole Olowookere threw Raheemot Adebayo and Anastasia Atume into the fray, pulling out Aminat Bello and Kafayat Bashiru.

The changes brought instant reward as Atume was fouled near the Congolese goal area, and Tumininu Adeshina rammed the ball into the net for Nigeria’s second.

Atume missed a sitter two minutes later, but with 14 minutes to go, Taiwo Ajakaye took on the Congolese defence and teased out goalkeeper Lumela before finishing smoothly for Nigeria’s third goal.

The Congolese finished the tie with only 10 players after Nwanji was shown the red card 20 minutes to full time.

Both teams clash again on March 19 at the Samuel Ogbemudia Stadium, with the Flamingos already with a leg into the third round, where they have the U17 girls of Egypt waiting.