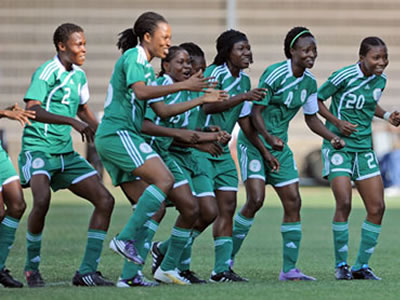 Match officials for Saturday’s 2022 FIFA U17 Women’s World Cup qualifying match between the U17 girls of Nigeria and those of the Democratic Republic of Congo will arrive in Nigeria on Thursday.

Beninoise official Laurande Offin Kayode has been selected by the Confederation of African Football to be referee for the match, alongside her compatriots Nafissatou Yekini Shitou (assistant referee 1), Djaria Bio Yacoubou (assistant referee 2) and Aurore Christelle Ligan (fourth official). The match commissioner is Christine Ziga from Ghana.

The encounter is one of the second round, second leg of the African series for the championship to be hosted by India in the month of October. Nigeria’s Flamingos took the wind off the sails of the Congolese in the fixture by winning the first leg in Kinshasa 3-0 on Sunday, 6th March.

Midfielder Blessing Emmanuel, defender Tumininu Adeshina and forward Opeyemi Ajakaiye shared the goals among themselves at the Stade de Matrys, and the impression of an attack-minded squad in which anyone is capable of scoring subsists for Saturday’s game at the Samuel Ogbemudia Stadium in Benin City.

The Flamingos arrived in Benin City on Tuesday evening, with Coach Bankole Olowookere insisting his girls will go all out for victory despite the massive advantage from the opening leg.

“There is no complacency in our camp. Every match must be approached with the mentality of gaining victory. We did well in Kinshasa but the girls wasted a number of scoring chances and we have been working on that. Clinical precision is key for any team that wants to win matches and tournaments.”

The winner on aggregate after Saturday’s encounter will earn a place in the third round of the series, where the U17 girls of Egypt await, in the month of April. The final round of the qualifiers will be in May.

This year’s FIFA U17 Women’s World Cup finals, the seventh edition since it was launched in New Zealand in 2008, will take place in India, 11th – 30th October. Nigeria have missed only one edition of the tournament (the 2018 finals in Uruguay) but participated in the 2008, 2010 (Trinidad & Tobago), 2012 (Azerbaijan), 2014 (Costa Rica) and 2016 (Jordan) championships. The 2020 finals, scheduled for India, were annulled by the global coronavirus pandemic.