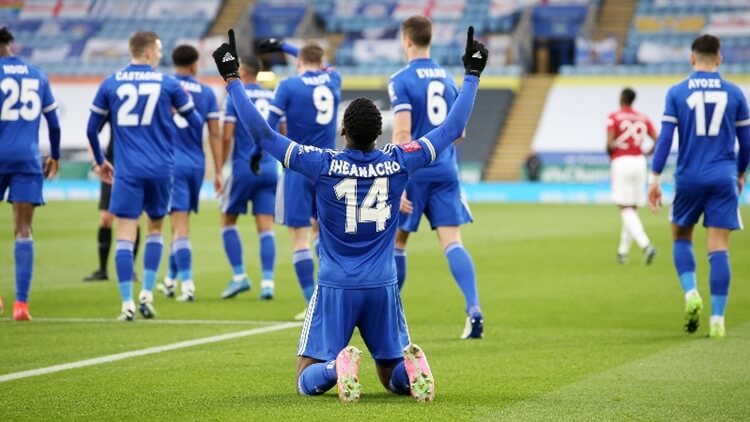 All three of the Foxes’ trips to Wembley Stadium in 2021 have ended in 1-0 wins, with Iheanacho the scorer of a solitary goal in the FA Cup Semi-Final in April, before his spot-kick this weekend secured Leicester’s second Community Shield success.

The triumph came exactly 50 years to the day that City lifted the Community Shield for the first time, and Iheanacho’s post-match celebrations – in front of 19,000 of the Club’s fans – saw him exude joy in the capital.

“I don’t know what to feel at the moment,” he told LCFC TV. “It was a good game and it was a tight game. Scoring at Wembley, I’m over the moon.

“I’m really happy we got our first trophy to kick off the season. We’ll concentrate and keep working hard, and hopefully we’ll get another trophy this season.

“They (the fans) have been waiting for that. Obviously, Man City is my old team, so there’s mixed emotions, but I think the fans needed something like that. I’m really happy they enjoyed today.”

Iheanacho’s successful penalty proved to be his 40th goal for the Football Club across all competitions, and it secured City’s second trophy in the space of just four months.

He said of the match-winning moment: “I was a bit nervous what I was walking through to take it, but I just had one thing on my mind – just hit it hard. It could go anywhere, so I’m happy we got the win today.

“I thought it was going to go to penalties at the end, but we got a penalty and I took it. It hit the back of the net, so I’m happy.”

One of several talented strikers at the Club, Iheanacho explained why his fellow attackers will all contribute to the 2021/22 campaign across all formats.

“We’re not in a battle in our team,” he added. “Everybody is important. We need everybody to get through this season. There are a lot of competitions, so we need everyone.

“Patson [Daka] will be important to the squad. Me as well. Vards (Jamie Vardy), Madders (James Maddison) – everyone is important in the squad. We are together as a team and as a family.

“I’ll keep working hard and at the end of the season, we’ll see what happens.”