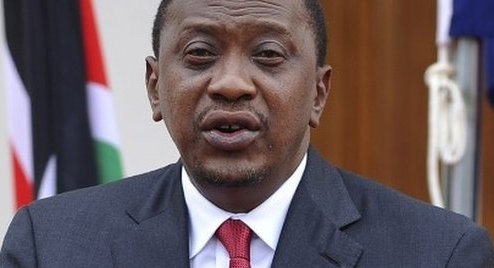 Prosecutors at the International Criminal Court in The Hague have said they are withdrawing charges against Kenya’s leader, Uhuru Kenyatta.
A statement said the evidence had “not improved to such an extent that Mr Kenyatta’s alleged criminal responsibility can be proven beyond reasonable doubt”.
President Kenyatta was indicted for crimes against humanity in connection with violence after elections in 2007.
He had denied the charges.
On Wednesday, the court had given prosecutors a week to decide whether to pursue their case or to drop charges.
Further delays in Mr Kenyatta’s case would be “contrary to the interests of justice”, it had said.
Mr Kenyatta was the first head of state to appear before the court, after he was charged in 2012.
The prosecution repeatedly asked for more time to build its case, saying witnesses had been bribed and intimidated, and the Kenyan government had refused to hand over documents vital to the case.
Mr Kenyatta denied inciting ethnic violence following the disputed 2007 elections in order to secure victory for then-President Mwai Kibaki.
He said the ICC case was political.
Mr Kenyatta won presidential elections in 2013, with the backing of Mr Kibaki.
He used the case against him to rally nationalist support by accusing The Hague-based court of meddling in Kenya’s affairs.
Some 1,200 people were killed in the violence in 2007-8 and 600,000 were displaced.
President Kenyatta’s deputy, William Ruto, is on trial at the ICC on similar charges after his legal team’s efforts to have the case thrown out failed.
He and Mr Kenyatta were on opposing sides during the 2007 election, with Mr Ruto accused of fuelling violence to bolster opposition leader Raila Odinga’s chances of becoming president. He denies the charges.
Mr Ruto subsequently formed an alliance with Mr Kenyatta in the 2013 election, opening the way for him to become deputy president.
Analysts say the dropping of charges against Mr Kenyatta while the case against Mr Ruto continues risks reopening a political rift and upsetting Kenya’s delicate ethnic balance.
BBC.