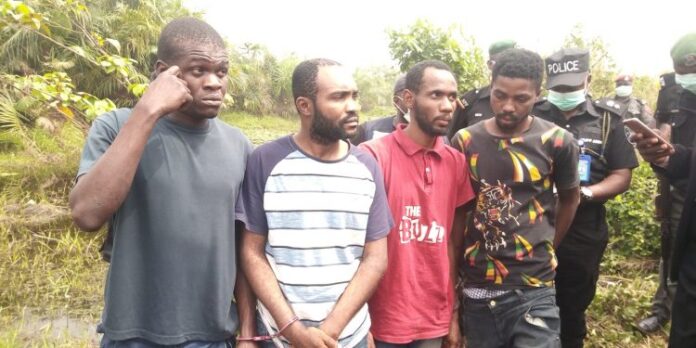 A 42-year-old Medical Doctor, Daniel Ibeaji, has told police how he lured Chief Ignatius Odunukwe to his hotel room with the pretence that he wanted to buy a property from him.
Three other suspects identified as Arinze Igwe (26), hotel worker; Solomon Cletus (30); and Israel Obigaremu, a Uber driver (35), were arrested by the detectives attached to Zonal Intervention Squad of the Zone 2 Command, Onikan, Lagos State after painstaking investigation.
According to Ibeaji, he went to Abuja for a function and saw the property at Katampe Estate and then approached the security guard that he is interested in buying it.
The guard introduced him to Chief Odunukwe via phone and they both exchange phone numbers.
He said after he left Abuja and came to Lagos, he contacted Chief Odunukwe that he was the one interested in buying the building and they both fixed a price of N900 million for the property.
The Doctor said: “We met in Lagos before the incident to discussed some modalities. We then fixed another date for December 1, 2019 and before then I had my plan of what to do because he promised to come along with the original documents of the building. On the fateful day my boys were already within the hotel premises and told them to be on alert.
“I was at beach resort when he came to meet me. It was on Sunday. There was a lot party going on in the hotel. Immediately he arrived, I walked him straight into my room where he sat on the sofa and we started discussing the business. After I drew I bag containing some money to show him that I am committed in buying the property. As he was bowing down to check the content inside the bag, I went behind him and hit him with axe twice on the head and he fell down.
“Immediately, Chief Odunukwe fell down, he was still struggling on the ground, I called Cletus and we dragged him into the toilet, where we injected him with a poisonous substance. The he was confirmed dead.
“I and Cletus forced his body into a carton, but the carton tore in the process. I then sent Cletus to get a Ghana Must Go bag, which we later used and then cellotaped the bag, after which we were planning on how to dump his body in the bush or expressway.”
Ibeaji said Cletus then went into the hotel with the hope to survey the area, adding: “Fortunately, one of the hotel workers, one Arinze, promised to help and we also promised to loan him N2 million if we are able to move it out of the hotel.”
Cletus on his own said when he saw Arinze, he lied to him that they have something they wanted to dispose and he doesn’t know where to dump it, adding: “When Ibeaji then came in and promised to loan Arinze N2 million, it was then he agreed to show us where to dump it.
“We were able to move the deceased’s remains out of the hotel through the laundry section because there was a serious noise at the hotel as a result of the party on the fateful day. When we got to Ogombo, we chopped the body into pieces and then threw the remains of the Chief into the swamp and went back to the hotel.
“I met Ibeaji in the prison at Abuja. It was there Ibeaji told me he has a business he wanted me to help him execute in Lagos last year. When I came out of the prison in September, we contacted each other through phone and we meet in Lagos. It was then he told me about the deal and promise to loan me N2 million to start a business of my own. I fell for the money because I don’t have hope to start my life afresh.”

COVID-19: Only one person missing from our Ejigbo isolation centre —...