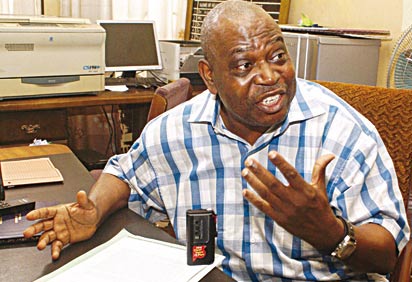 A wrongful overtaking by the driver of a Toyota Hilux in the convoy of the Kogi State Governor, Captain Idris Wada, led to the death of foremost lecturer and former President of the Academic Staff Union of Universities, Prof. Festus Iyayi.
The The Kogi State Sector Commander of the Federal Road Safety Commission, Olakunle Motajo, who on Tuesday confirmed the death of Iyayi in a road crash in Lokoja, Kogi State, said preliminary report on the accident confirmed this.
Iyayi was travelling to Kano for the National Executive Council meeting of ASUU, scheduled for Wednesday, when the accident occurred at about 11:45am.
Motajo described the accident as unfortunate.
He said the accident involved a Toyota Hilux in the motorcade Wada and a Toyota Hiace bus belonging to the University of Benin ASUU chapter.
Iyayi was in the union’s bus with two others, including a woman, who sustained a fracture in her left arm, while the other had bruises but the driver escaped unhurt, Motajo said.
The corpse of Iyayi has been deposited at Kogi State Specialist Hospital in Lokoja, where other injured victims are also being treated, he said.
The FRSC Sector Commander told the News Agency of Nigeria that a preliminary report on the accident revealed wrongful overtaking on the part of the government vehicle.
The governor, who was returning from Abuja, later visited the emergency ward of the hospital to commiserate with the victims.
He was also at the hospital mortuary to the see the dead body and directed the management of the hospital to give the victims the best of care.
Some ASUU members were also seen around the emergency ward but refused to talk on the accident.
Some residents of Banda community, who witnessed the accident, told NAN that the two vehicles collided and the ASUU bus somersaulted three times before hitting a big tree in the bush.
NAN reports that seven policemen in the vehicle in the motorcade also sustained injuries and are receiving treatment at the Government House Clinic in Lokoja.
Meanwhile, Wada has ordered a full investigation into the accident.
The governor in a statement in Lokoja, expressed sadness over the death of Iyayi and sympathised with those injured and their families.
The statement, signed by the Special Adviser to the Governor on Media, Jacob Edi, claimed that the “governor’s convoy was on a speed of 80km per hour when a bus collided with the escort van.”
It is not the first time Wada’s convoy would be involved in a fatal accident.
Born in 1947, Iyayi attended Annunciation Catholic College and Government Ughelli, Delta State.
He obtained an MSc in Industrial Economics from Kiev Institute of Economics and a PhD from Bradford University, England.