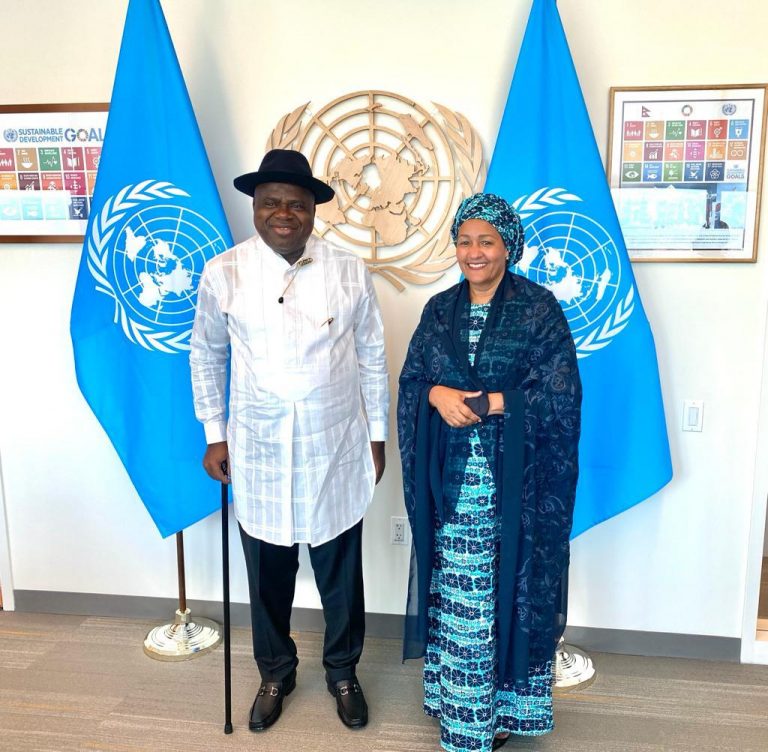 Bayelsa State Governor, Senator Douye Diri, says his government remains committed to the attainment of the Sustainable Development Goals (SDGs) outlined by the United Nations to enhance the living conditions of the people of the State.

Diri’s resolve is contained in a statement signed by his Director Director, on New Media Dr. Kola Oredipe.

Governor Diri who gave the assurance when he visited the Deputy Secretary-General of the United Nations, Dr. Amina Mohammed, at the UN headquarters in New York, United States of America, said the continued collaboration with the global body would fast track development in such areas as education, health, youth, and women empowerment, food production and the environment.

Oredipe recalled the Governor who congratulated Dr. Mohammed for rising to the enviable position and for her great work at the UN, stated that the collaboration would enhance the prosperity agenda of his government to the people of the State, insisting that his government is building critical infrastructure that will provide great opportunities to open up Bayelsa State for more investments in different sectors.

“First, we are here to congratulate you on your appointment and to say that you are a worthy ambassador of Nigeria in the United Nations. So far, you have done very well occupying this office, please continue to help humanity. We have come to strengthen the existing relationship between Bayelsa State and the UN. We are committed to the attainment of the SDGs for the betterment of our people in education, health, sanitation, access to clean water and ensuring we live in a safe environment devoid of pollution”, Diri stated.

He said that the State Government took a deliberate effort to open up the maritime domain with the three ongoing Senatorial roads linking several riverine communities and corridors to the Atlantic ocean where so many opportunities exist for the establishment of a sea port and massive aquaculture project.

“Yes, we are an oil producing state but we have more wealth in the sea and agriculture. Because, we are located in the Gulf of Guinea, we must also strive to tackle the security issues on our water ways to attract serious investments. I have offered to host the meeting of the Gulf of Guinea in Yenagoa. When our waterways are safe, we can tap the tourism potential there in. We already have an agreement with a European consortium on deep sea fishing and ship building, an investment capable of providing over 2,000 jobs. The roads we are constructing along the three corridors will take us to Brass, Agge in Ekeremor to develop a deep sea port and also link us to the Ocean through Oporoma”, Diri said.

On the unabated environmental pollution and degradation, Governor Diri, said the ongoing clean-up in Ogoni land by United Nations Environment Programme (UNEP) should be extended to the entire oil-rich Niger Delta and that Bayelsa State is worst affected by  incidents of oil spills leaving behind attendant devastated ecology and health issues.

According to him,“You are very familiar with our stories and the Niger Delta environment. We must commend what you started in Ogoni as then Minister of Environment. Our land, rivers are polluted. The remediation of the region must be total. Bayelsa State is worst affected.”

In her response, Mohammed, appreciated the pace of development in Bayelsa State since its creation in 1996 and that the UN was ready to deepen the existing relationship with the State to support ongoing development efforts by the current administration.

“A lot has happened in terms of infrastructure in Bayelsa State since creation alongside my own State of Gombe. We are here to support nations, communities to grow. We are working with leaders like you to add values to the lives of the people and create opportunities for the young people to harness their potential. Here, we are working hard to realise those SDGs and make our society better”, she stated.

Dr. Mohammed who welcomed the request for the hosting of the Gulf of Guinea meeting by Bayelsa State, said the UN was disturbed at the level of environmental pollution in the oil-rich Niger Delta, a situation she described a ‘complete disaster.’

She added, “It is not just about Ogoni land but the remediation should be for all oil producing places. The means of livelihood of the people, fishing and farming are greatly affected. Oil pollution is a complex thing and it is a complete disaster which requires urgent intervention.”