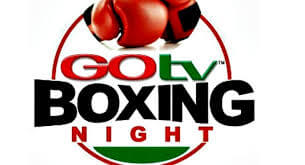 Share
Facebook Twitter LinkedIn Pinterest Email
Former national lightweight boxing champion, Nurudeen “Prince” Fatai, has dismissed the chances of Oto “Joe Boy” Joseph defeating him again when they clash at GOtv Boxing Night 10 holding on December 26 at the Indoor Sports Hall of the National Stadium, Lagos.
Fatai, who had lost a title fight and a challenge contest to Joe Boy, said he will beat the reigning champion like a child.
He blamed his first loss, via a knockout, on a hand injury, before losing his title to Joe Boy.
Since their first fight, streams of bad blood had flowed between the two boxers, marked by two near-physical clashes at radio stations.
“This time, he is finished. I will beat him like a baby. He won the first fight because I was injured, got lucky in the second one, but he will be badly beaten in the coming one. He is my boy. His name, Joe Boy, even says it. After beating him at GOtv Boxing Night 10, I will now challenge him to a title fight, so I can regain my title,” said Fatai.
GOtv Boxing Night 10 will feature seven fights, including a continental and a sub-regional title.
Stanley “Edo Boy” Eribo of Nigeria will fight Meshack “Smart Mwankemwa of Tanzania for the African Boxing Union welterweight title, while Olaide “Fijaborn” Fijabi will take on Raphael “Iron King” Kwabena of Ghana for the West African Boxing Union welterweight title.
In the featherweight division, reigning national champion, Waidi “Skoro” Usman, will face Dare “Fighting Machine” Oyewole, the man he dethroned as champion.
The light heavyweight division will see action provided by Kabiru “KB” Godson” Towolawi, who is up against Emmanuel “Man Mopol” Igwe.
Another clash in the light welterweight category will bring Rilwan “Baby Face” Babatunde against Sikiru ‘Omo Iya Eleja’ Shogbesan. Rilwan “Real One” Oladosu and Prince “Lion” Nwoye will do battle in the second lightweight clash of the evening.
The best boxer of the evening will go home with N1.5 million.
GoTV GOtv Boxing Night 10 Joe Boy Prince Fatai
Share. Facebook Twitter Pinterest LinkedIn Tumblr Telegram Email