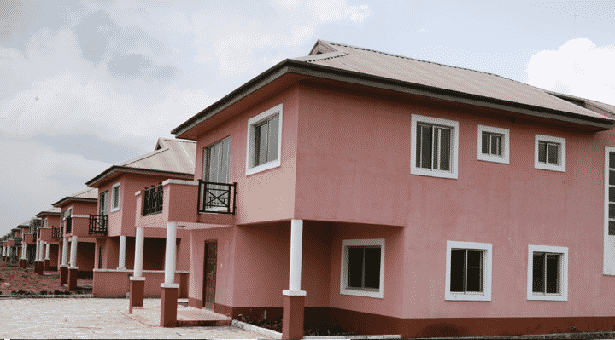 Some applicants of the Federal Government Staff Housing Loans scheme have called for a probe of the activities of Federal Government Staff Housing Loans Board, the operators.
The applicants made the call in Abuja on Thursday, saying the activities of the board undermined the objectives of the government to provide decent housing for the citizens, especially public servants.
They accused workers of the board of manipulating the process for self-aggrandisement at the expense of genuine applicants.
The applicants said while those who genuinely met the conditions for accessing the loan were dropped, late applicants who bribed officials and their collaborators benefitted.
Ugochukwu Livinus, an applicant and employee of an agency of the Ministry of Information and Culture, said he applied in 2010 and was assigned file number HB40109.
Livinus told the News Agency of Nigeria that he got approval for N5 million to build a three bedroom bungalow in April, 2013, after which he was asked to pay N65,000 as insurance for mortgage and accidental expenses.
He said he made the payment to the board’s Central Pay Office while the approval letter was signed by the Executive Secretary of FGSHLB at the time.
He said besides paying the N65,000, he also committed his hard-earned money as poor civil servant to do a building plan and bill of quantity.
Livinus noted that he did all this because of his belief in the system, but since April 11, 2013, he had not received any further communication, while those who applied later had been given their money.
He alleged that some officials of the FGSHLB, in collaboration with some private developers, were doing everything possible to frustrate civil servants from accessing the loan.
Livinus alleged that some applicants, who agreed to work with private developers and officials of the board, received approvals and disbursement of funds to them soon after they applied.
Another applicant, who preferred not to be named, said her application was approved in 2012 but she had yet to receive her money after fulfilling all the conditions.
The lady said she had four years to retire from service but had no house.
She told NAN that her greatest challenge was that officials of the board claimed that original land documents which she submitted to the board were missing.
She said: “For heaven’s sake, they should give me my land documents since it is obvious that I may not get the four million naira that was approved for me.’’
She urged relevant authorities to investigate the board, saying that the fraud in the board was alarming.
Simbiat Adeleke and Bola Ajamgbadi, also applicants, called on the government to probe the board’s activities.
She queried the board’s claim of lack of funds as the reason for non-payment of beneficiaries’ approved loans.
Ajamgbadi said: “How can the board claim no money as the reason for non-payment while it is recovering loans directly from the beneficiaries’ salaries?
“This is supposed to be a revolving loan and the board got a substantial amount from past administrations.
“The board needs to render an account on how it disbursed the initial money it received and how much it has so far recovered in order to convince anybody that it lacks the funds to continue paying approved loans.
“Moreso, why should it continue to approve loans if it has no money to pay?
“Truly, something is wrong about the board’s activities which the government should move in quickly and uncover.”
Meanwhile a director in one of the government parastatals, who pleaded anonymity, called for an urgent scrutiny of the board’s activities.
The director said deduction of the second tranche of the loan approved for him in 2011 was already ongoing while he had not received the loan.
The director said: “Integrated Payroll and Personnel Information System has started deducting the second instalment more than a year ago and all I hear from the board is no money, be patient.
“I believe the board does not have an efficient way of tracking repayments otherwise, they should be able to know when one’s payment is due and pay accordingly.”
He urged the Federal Government to overhaul and probe the activities of the board, adding that the place was fraught with irregularities.
All efforts that NAN made to clear issues that the applicants raised with Dr. Hannatu Fika, the Executive Secretary of FGSHLB, failed.
Fika had promised to get back to NAN after she had investigated the cases brought to her attention and directed the Head of the Public Relations Unit of the department, identified as Akin, to arrange a meeting.
However, Akin had fixed appointments for NAN to speak with the secretary on a number of occasions, but cancelled them on the ground that Fika was busy.