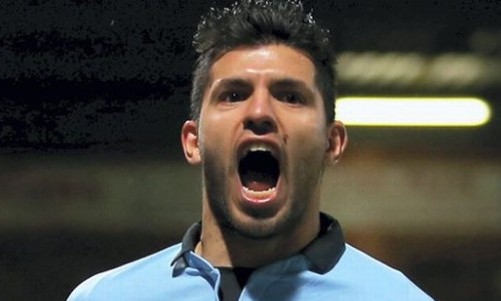 Manchester City has moved 16 points clear at the top of the Premier League table courtesy of a 5-1 victory over Leicester City at the Etihad Stadium on Saturday.
Sergio Aguero scored four second-half goals to take the game beyond the Foxes, who went into the break all square after Jamie Vardy had cancelled out Raheem Sterling’s early opener.
Kevin De Bruyne pulled the strings throughout in another majestic display for the champions-elect, but Aguero stole the headlines with a four-goal haul which takes him level with Mohamed Salah in the Premier League’s top-scorers list.
Man City broke the deadlock inside three minutes, with Sterling going some way to atoning for his costly miss against Burnley last weekend by this time converting from close range.
Nicolas Otamendi’s loose pass with pounced upon by Vardy, who skipped away from Oleksandr Zinchenko and Ilkay Gundogan before getting the better of Aymeric Laporte and drilling his finish into the bottom corner via a slight deflection.
The two sides went into the break all square but, just as was the case in the first half, Man City made a quick start to the second and were back ahead within three minutes of the restart.
Once more the imperial De Bruyne was the creator, delivering another sumptuous pass into the box which left the defence and goalkeeper helpless as Aguero tapped it in at the back post.
Otamendi drew another save from Schmeichel, but the Leicester keeper was at fault for City’s fourth when he gave the ball straight at Aguero when trying to play out from the back, allowing the Argentine to lift his finish over the stranded shot-stopper and into the empty net for his hat-trick.
The Argentine was not finished there, though, and he saved the best for last as he capped off the rout in the final minute of normal time, unleashing an unstoppable dipping strike from outside the area which crashed off the underside of the bar and in.
Pep Guardiola’s side will now turn their attention to cup duties for the remainder of the month, with Champions League, FA Cup and EFL Cup matches to come before they are next in Premier League action against Arsenal on March 1.