A former Managing Director of the United Bank for Africa, Tony Emumelu, has threatened to take legal action against the Chairman of the Senate Committee on Ethics, Privileges and Public Petitions, Senator Ayo Akinyelure, over allegations that he and two other former MDs of Africa’s largest bank “systematically” defrauded Nigeria’s national telecommunications carrier, Nigeria Telecommunications Limited, of N41 billion.

Elumelu issued the threat in a letter by his lawyer to the Chairman of the Senate Committee, which went public on Monday.

He, however, gave Akinyelure seven days within which to retract a statements credited to him, the letter by Kemi Balogun (SAN) and R.A. Lawal-Rabana (SAN) said.

The Senator had last week at the sitting of the committee during a probe of a petition by NITEL accused Elumelu, who is also the Chairman of Tony Elumelu Foundation, of overseeing the alleged pilfering of the firm’s N41 billion alongside two former MDs of UBA over a period of nine years.

He said: “The N41 billion alleged fraud was committed against the defunct telecommunication company and National Carrier, NITEL.

“The said sum was withdrawn systematically from NITEL for nine years under Tony Elemelu’s watch and two other former Managing Directors of United Bank for Africa.”

Acting on a petition by counsel to NITEL, J.U. Ayogu and Co, the Senate committee has summoned the Group Managing Director and Chief Executive Officer of the United Bank for Africa, Kennedy Uzoka, to appear before the committee on August 5, 2020.

But in the letter by his lawyers, Elumelu said he was was alarmed and appalled by the deliberate peddling of falsehood and misinformation against an unblemished personal and business reputation, painstakingly built over several decades with great personal sacrifice and unquestionable integrity.

The letter said: “It is important to emphasize that when UBA appeared before the Senate Committee on Ethics, Privileges and Public Petitions, attention was drawn to the fact that the facts and circumstances leading to the disputes on the alleged financial indebtedness was pending before the Supreme Court in SC/CV/112/2020.

“It was resolved that given the pendency of the matter at the Supreme Court, it was sub judice and all actions on the matter be suspended.

“The publications ascribed to Senator Ayo Akinyelure is in total disregard of the Rules of Senate and the Rule of Law.”

Elumelu demanded an immediate, open, public and unreserved retraction of the statements credited to Akinyelure as well as an apology from him, adding: “We have our Client’s further instruction to take all appropriate legal actions against Senator Akinyelure and his media agents if our above-stated demand is not met within Seven (7) days of their receipt of our demand letter.”

The full letter is attached. 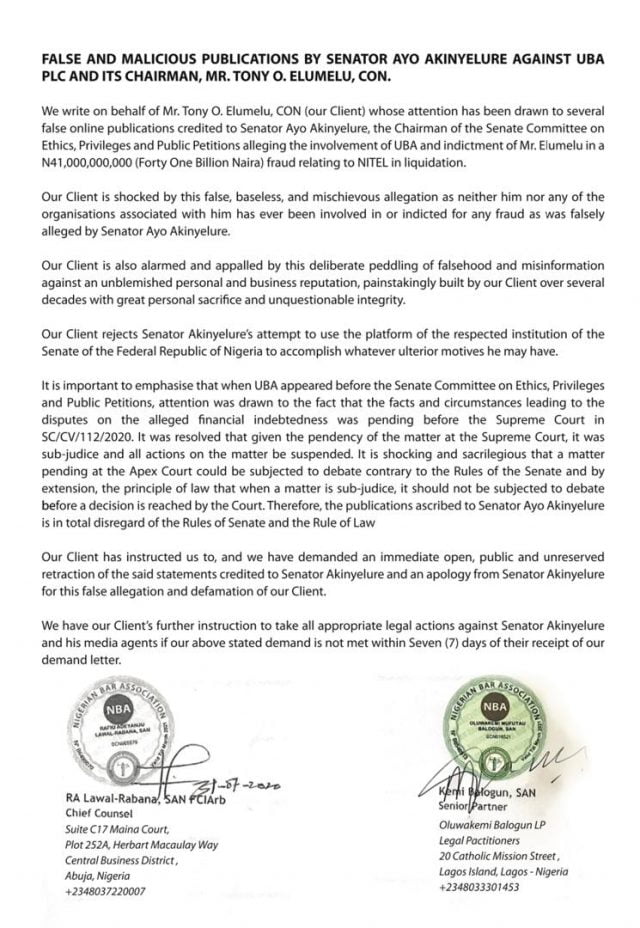