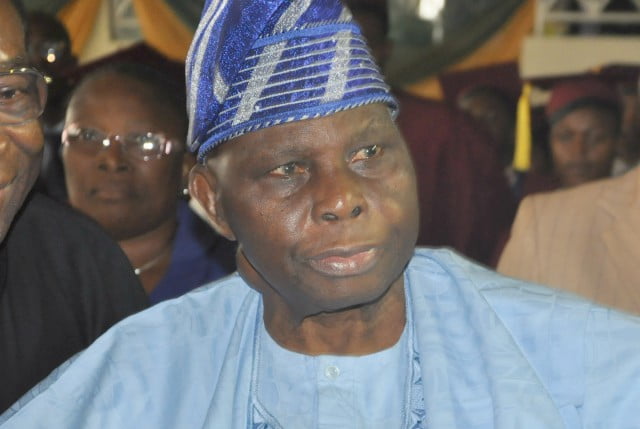 Elder statesman and eminent businessman, Dr. Lekan Are, is dead.
Are was said to have died on Saturday (today) at the University College Hospital, Ibadan, Oyo State.
The Patron of Government College Ibadan Old Boys Association and Chairman of Kakanfo Inn and Conference Centre, Ibadan was aged 86.
He clocked 86 on January 10, 2020.
The President of GCIOBA, Dr. Wale Babalakin, announced Are’s passage in a statement on Saturday.
According to Babalakin: “With gratitude to God for a life well spent we announce the exit of our dear Patron and Trustee Lalekan Emmanuel Are (1948, Field House), President GCIOBA 1989-2006.
“Lekan Are is widely known for the passion with which he championed the GCI cause and everything GCIOBA, Lalekan Are was the epitome of a great Old Boy.
“We commiserate with the Are Family, particularly the Young Girl, his Old Boy sons Ayokunmi (1976 Set), Adedamola (1978 Set) and his son-in-law Denny Igun (1971 set) and the entire Are family of Oke-Are Ibadan.
“The entire GCIOBA, Are family and indeed Oyo State have lost a giant whose passion for the development of education in Oyo State is unequalled
“Dr Lalekan Are passed on at the age of 86 after a brief illness at UCH today 18th January 2020, may his gentle soul rest in peace. Funeral Arrangements will be announced by the family.”
Are, an Officer of the Order of Niger and former Deputy Director, Cocoa Research Institute of Nigeria, served as Deputy Executive Secretary, West Africa Rice Development Association; Professor of Agronomy, University of Sierra Leone; and General Manager/CEO, Ogun-Osun River Basin Development Authority before retiring into private practice.