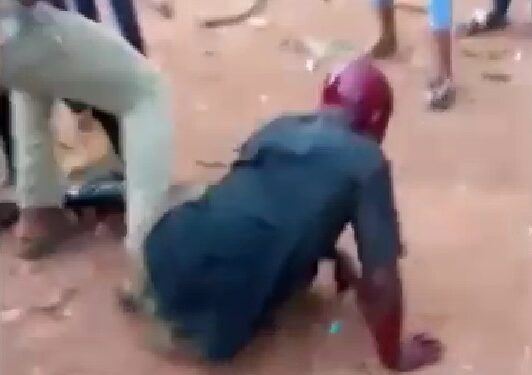 Two videos are now making the rounds on the protest of students of the Federal University, Oye Ekiti, Ekiti State, which turned violent on Tuesday, allegedly leading to the death of one policeman and four students.
According to available reports, the students were protesting over erratic power supply by the Benin Electricity Distribution Company while Erelu Bisi Fayemi, the wife of the Ekiti State Governor, Dr. Kayode Fayemi, was in the town for her ongoing empowerment programme.
The programme has seen Erelu Fayemi empower women in some local governments already, with the 16 LGs in the state scheduled to benefit.
The students, according to the report, damaged the vehicles in the convoy of Erelu Fayemi, with the wife of the Governor having to be taken away from the scene by security agents.
This, sources said, could only be done by firing into the air to pave the way for escape.
A bullet allegedly hit one of the students, which led to his death.
But the students claimed that four of them were shot dead by the security operatives attached to the Governor’s wife.
This led to the students allegedly beating to death one of the policemen who could not escape with his colleagues as claimed in one of the videos making the rounds.
In the second video, a female student was heard alleging that policemen had invaded their hostels and were destroying the facilities there, including windows and doors.
Some shattered windows were shown in the short video.