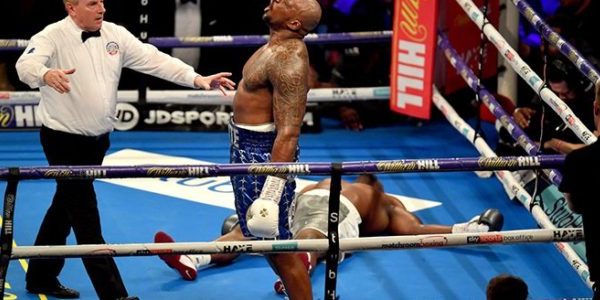 Dillian Whyte will face Alexander Povetkin in a rematch on November 21 and attempt to position himself for a shot at the world heavyweight title.

Britain’s Whyte was dominating Russia’s Povetkin when they met on August 22, but was knocked out by a vicious left hand.

It cost the 32-year-old a shot at a world title early in 2021 but a rematch clause in the contract will afford him another fight with Povetkin, 41.

Promoter Eddie Hearn said the bout is “must-win” for Whyte.

Whyte opted to swiftly return to his Portugal training camp after a fifth-round defeat that featured one of the most spectacular knockouts in recent heavyweight memory.

In announcing the bout, Hearn has also outlined a schedule for other eye-catching fights including Britain’s Chantelle Cameron bidding for a first world title when she faces Brazil’s Adriana Dos Santos Araujo for the vacant WBC super-lightweight belt on October 4.

Rio Olympian and undefeated British light-heavyweight Joshua Buatsi will also feature on the card, while on October 17 Savannah Marshall will take on Scotland’s Hannah Rankin in an all-British fight for the vacant women’s WBO middleweight world title.

No venues have been listed for the fight nights but Hearn said the shows will run “with our without fans” and that talks are ongoing with the UK Government for spectators to return to arenas.

A number of pilot events are currently taking place across UK sport to ensure sporting fixtures can safely take place in front of reduced crowds during the COVID-19 pandemic.

In the minutes after being wiped out by Povetkin in August, Whyte emerged from his dressing room and told Hearn the knockout was simply part and parcel of heavyweight boxing.

The Briton requested the rematch take place before the year was out so he could be back on track by the time 2021 begins.

Whyte’s theory is he simply got caught by the finest shot Povetkin will ever throw and that a minor adjustment will be enough to right things when they meet again.

Others point to the craft Povetkin showed in the key split-second as evidence of the kind of pedigree that will be hard to overcome.

Some have gone on to question whether Whyte has returned to the gym too quickly and is in too much of a rush after such a heavy defeat.