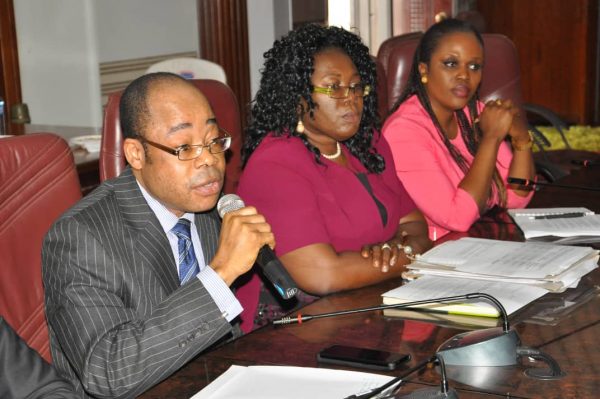 Share
Facebook Twitter LinkedIn Pinterest Email
Ebonyi State Government has withdrawn from the Bank of Industry the responsibility of handling the procedure for the disbursement of its joint loans for Civil Servants and other Micro Small and Medium Enterprises in the State.
The withdrawal was announced by the State Commissioner for Commerce and Industry, Ugo Nnachi, at the Executive Council Chambers, Government House, Abakaliki during a joint briefing on the outcome of Tuesday’s  State Executive Council meeting by selected officials of Government, led by the Commissioner for Information and State Orientation, Senator Emmanuel Onwe.
According to the Commissioner, the state government decided to take over the disbursement due to the delays and inability of the BOI to carry out the disbursement since the funds were lunched several months ago, adding that the state government would henceforth takeover the handling as well as the management procedure to ensure speedy disbursement to benefiting MSMEs and Civil Servants  in the state.
Nnachi explained further: “I want to announce to you that due to the difficulty and delay in disbursing the fund, the state government during the executive council meeting today terminated that programme with the Bank of Industry and the state Ministry of Commerce and Industry will now house the fund and ensure that all the 516 cooperative societies that have applied for the fund gets it within the shortest possible time.
“The termination is not that we are going to stop the loan but the fund will now be driven by the ministry of Commerce and Industry.
“And the other thing I will like you to know is that for the SMEs, the fund also is going to be driven by the ministry.
“We want to ensure that the beneficiaries get the money as and at when due.
“We discovered that the Bank of Industry has made it extremely difficult for the beneficiaries and even in the mail that we sent to them, we told them that the termination was as a result of the delay in the disbursement and the difficulty and stringent conditions in accessing the loan even when most of the beneficiaries have met the requirements.
“The inability to carry the SMEs along and we felt that it was not fair on their part.
“And then, for the civil servants, we have about 516 cooperative societies that are registered to benefit from this fund and to fast track the disbursement, we processed about 240, the bank wrote to us that for them to commence disbursement, each of the beneficiaries must pay 1 per cent appraisal fee.
“And for us to deal with the delay and difficulty that have been experienced by the beneficiaries in accessing the loan since the MoU was signed, the state government decided to pay the 1 per cent appraisal fee.
“They assured us that immediately the payment, disbursement will start.
“But unfortunately, as I speak with you, that disbursement has not commenced and the state government has no alternative than to terminate that relationship and partnership and seek other ways of ensuring that civil servants of the state benefit from the fund at appropriate time.”
Meanwhile, the  State Executive Council has approved N52 million to execute sporting activities in the state for the year 2018.
The Sports and Youth Development Commissioner in the State, Charles Akpuenika, made this known while briefing journalists on his Ministry.
Akpuenika noted that three sports competitions have been earmarked to take place in the state before the end of the year, including the David Umahi Tertiary Institutions Games 2018 for the 10 tertiary institutions in the state.
He revealed that N500,000 have been disbursed to each of the participating institutions to enable them prepare and take part in the games.
He named other competitions to hold within the year to include the School Sports Competitions, which will hold in October, and the Divine Mandate Football Competition for all the 171 wards in the State.
He emphasized that the state Government was intensifying efforts to birth a new Football Club for the state to gainfully utilize the talents that would be discovered through these series of sporting activities lined up in the State.
The Commissioner for Power, Emmanuel Uguru, also informed journalists of the Executive Council’s review of the Contract sum for the installation of Solar Power Plants at some strategic location across the State from the initial N160 million to N207 million, which contracts have also been approved to be awarded at the meeting.
BOI civil servants David Umahi Ebonyi State MSMEs Ugo Nnachi
Share. Facebook Twitter Pinterest LinkedIn Tumblr Email