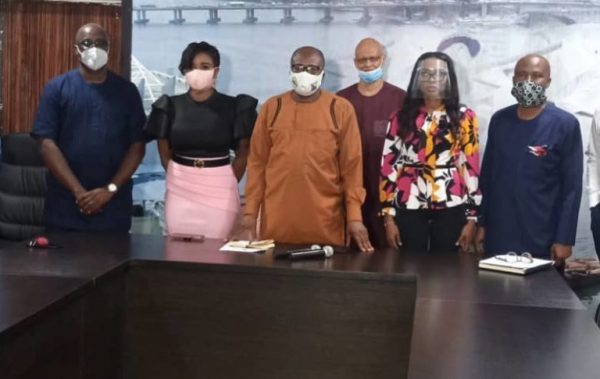 Nigerian cinema exhibitors, distributors and employees have sent an urgent save-our-soul message to the Federal Government and President Muhammadu Buhari, urging them to speedily open the theatre sector of the economy, including the film industry, to prevent what it termed “their imminent collapse”.

The association said the theatrical sector of the economy had lost over $50 million, equivalent of N22.5 billion, and more than 5,000 industry jobs since the Federal Government imposed the lockdown occasioned by Coronavirus Disease in March.

The Cinema Exhibitors Association of Nigeria raised the red flag and made the passionate appeal at a meeting held during the week at the Lagos State Safety Commission, Alausa, Ikeja, Lagos.

At a press conference that followed the meeting, the association also revealed to journalists their post-COVID-19 plans and how they intend to conduct their businesses in line with established health protocols once the sector is re-opened.

Addressing the press after their meeting, CEAN Chairman, Patrick Lee, lamented the enormous financial loss suffered by the Nigerian film industry due to the continued suspension of cinema operations and the theatre in general as a result of the lockdown.

Specifically, CEAN, in a press statement, declared that unless something drastic was done, the Nigerian film industry, which went into a free fall consequent upon the lockdown imposed on the country on March 30, 2020, faced possible extinction.

The organisation recalled that the Nigerian film industry, reputed to be the second-biggest film industry in the world, based on the number of films released, was, pre-COVID-19 pandemic, producing an average of 50 films weekly, accounting for over N200 billion in annual film industry revenue.

These, Lee said, was aside the fact that the industry was providing over one million jobs per year, thus ranking as one of the highest employers of labour in the country, second only to the agricultural sector.

Still, the industry, according to World Bank estimates, has the potential to produce one million more jobs.

Although CEAN acknowledged government’s effort to reopen the economy, with emphasis on prioritizing the safety of Nigerians, it observed that it was also “expedient to consider the huge economic disaster brought upon this very important sector by the continued suspension of cinema operations and other film-based businesses” in the country.

“Over 250,000 workers, some of whom are directly employed by 58 taxpaying cinemas in the country have been furloughed,” CEAN continued in the statement. “Recent multi-million dollar investments, like MX4D, IMAX & 4DX theatre halls with heavy technical equipment, have been left to deteriorate; international/local creditors and investors are crying out for their money; production of films has been suspended, consequently resulting in joblessness and huge debts for Nollywood professionals. In 2019, the sector grossed over N10 billion in box office earnings alone, with estimated total revenue of N35 billion.”

The association, therefore, added everything and inferred that “the most rational treatment from the federal government should be to include cinema and allied services in all possible financial interventions.”

The association drew a parallel between the Federal Government’s directives to reopen domestic flights from July 8, 2020, and submitted that a critical evaluation of operational processes would reveal similarities between airports and cinemas.

It said: “A domestic flight from Lagos to Yola takes two hours, 30 minutes, which is the same running time for all movies,” the association argued. “Likewise, each customer is expected to spend a minimum of three to four hours for a domestic flight which consists of arrival at airport, ticket purchase, queuing, waiting, boarding, flying and exiting the aircraft; the same hours per customer processes can be likened to cinema visitor.

“Therefore, it is only more logically justifiable to classify cinemas alongside aviation (in prioritising resumption), rather than with the hospitality sector, consisting businesses such as event centres, hotels, and bars with almost very different processes.”

The CEAN submitted that the only way to checkmate the psychological impact of the lockdown on Nigerians was to allow people to let off steam at leisure centres with well-defined safety measures in place.

Lee assured that his organisation had mapped out 10 safety protocols in tandem with the guidelines of the Nigeria Centre for Disease Control that would efficiently help cinema operators to combat the spread of COVID-19 while receiving customers at the movie theatres.

“In the recent past,” Lee continued, “the cinema industry had gained international recognition as a money-spinning sector, and a major catalyst to the growth of Nollywood. At the last Cinemacon, organized in 2019 by the Global Cinema Federation, GCF, and the National Association of Theatre Owners (NATO) in Los Angeles, USA, the industry was decorated as the Emerging Cinema Market of the year. Some of its major players have sealed international partnerships worth millions of dollars; introducing premium cinematic experience to Nigerian film lovers.

“The coronavirus pandemic had an exact effect on all cinema industries in Europe, the United Kingdom, and America. However, considering the interventions by those governments, players in those markets are comfortably restarting their businesses and have sustained the livelihoods of their employees. The federal government needs to take a cue from that and save the second-largest employers of the Nigerian youth population from an imminent collapse.”