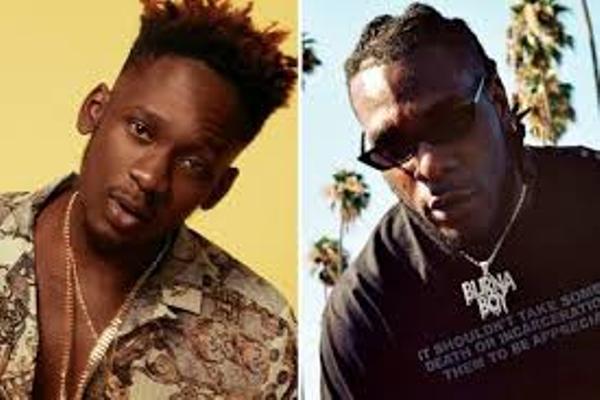 Share
Facebook Twitter LinkedIn Pinterest Email
Nigerian music stars Damini Ogulu, aka Burna Boy, and Tosin Ajibade, aka Mr Eazi, are set to make their Coachella debut in April.
The Coachella Valley Music and Arts Festival is an annual music and arts festival held at the Empire Polo club in Indio, California.
It is one of the most famous and profitable music festivals in the United States and all over the world.
The News Agency of Nigeria reports that according to the lineup announced through Coachella’s official Instagram account: @coachella, Burna Boy will perform on April 13 and 20, while Mr Eazi will have his performance on April 14 and 21.
The duo have, in the past year, made tremendous progress and impact in their music genres with Burna Boy performing sold out shows and Mr Eazi breaking streaming records.
Burna Boy’s “Ye” remains one of the most listened-to Nigerian songs and Mr Eazi’s “Lagos to London” EP maintained a large global impact.
NAN reports that in 2018, Wizkid was billed to perform at the festival but was unable to due to what the singer termed “visa issues”.
The festival was, however, headlined by Beyoncé, whose performances were one of the most-talked about moments of the year.
Ariana Grande, Childish Gambino and Tame Impala will headline the upcoming show, while actor and DJ, Idris Elba, Solange, the 1975 and Janelle Monáe will perform.
Kacey Musgraves, Rosalía, Yves Tumor, SOPHIE, Mac DeMarco, Idris Elba, Jon Hopkins, Kaytranada, Anderson .Paak, Juice WRLD, Playboi Carti, Let’s Eat Grandma and Sheck Wes are also part of the lineup.
NAN.
Post Views: 0
burna boy Coachella Damini Ogulu Mr Eazi Tosin Ajibade
Share. Facebook Twitter Pinterest LinkedIn Tumblr Email