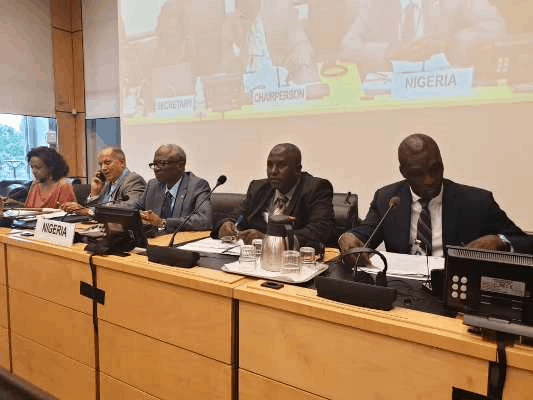 The Federal Government has reiterated its position on the implementation of the rights of terrorists, especially the Boko Haram insurgents and Internally Displaced Persons.
Ambassador Audu Kadiri, Permanent Representative of Nigeria to the United Nations Office in Geneva, who led the Federal government delegation at the Human Rights Committee review meeting in Geneva, Switzerland, said in a statement.
Kadiri, in the statement made available to NAN in Abuja on Wednesday said Boko Haram was an existential threat and there were no absolute liberties, not anywhere, as one person’s liberty ended where another person’s liberty started.
Regarding the Al-Zazaky case, he noted that there were two jurisdictions and two trials: one at the federal level, the other at the state level and bail was not possible for the latter trial.
He also noted that Boko Haram was a well-organised body and it was not a question of civilians providing them with resources, it was about the political economy of terrorism.
Kadiri pointed out that even more developed countries were struggling to address terrorism; no country had a rule book or a manual.
The delegation said that those who were willing to repent were being rehabilitated while those that said that they were not ready to change had to undergo the judicial process.
He explained that there were over one million internally displaced persons in camps due to Boko Haram’s actions, and those responsible had to be tried.
Kadiri noted that the Nigerian Government had established the North-East Development Commission to address comprehensively issues related to internal displacement, by, for instance, helping people resettle and regain their livelihoods.
The delegation said a national treaty depository had been created in the Ministry of Justice so that people could be abreast of conventions and foster compliance on the part of the Government.
The commission had the capacity and resources to fulfil its mandate.  Nigeria was a developing country; its resources were limited.
However, Kadiri stated that the Commission had not cried out that it was underfunded.
Speaking on the use of force and the proportionality of the responses of security forces, the delegation pointed out that the Nigerian Constitution allowed that the police use reasonable force when necessary, in accordance with the law.
Regarding Al-Zazaky, the leader of the Shia group, Kadiri said that he had been granted bail in Abuja and had subsequently faced criminal accusations in a different state where he was now on trial.
On the issue in Biafra, the delegation said there had been a clash between demonstrators and the army.
Kadiri said that the Government had always made it clear that when allegations of abuse arose, an entity would be tasked to examine the matter.
On sexual violence against internally displaced persons, Kadiri pointed out that this issue had been reported on two years ago, and the Government had welcomed the constructive remarks and launched an inquiry.
He stated that as a developing country, Nigeria also had developing institutions, and therefore needed the support of international institutions, including this Committee.
NAN reports that at the end of the presentation, Committee Experts thanked the delegation for their presence and stressed that the purpose was to find common ground.
The Committee also noted that it will formulate recommendations aiming to help the Government to move forward.