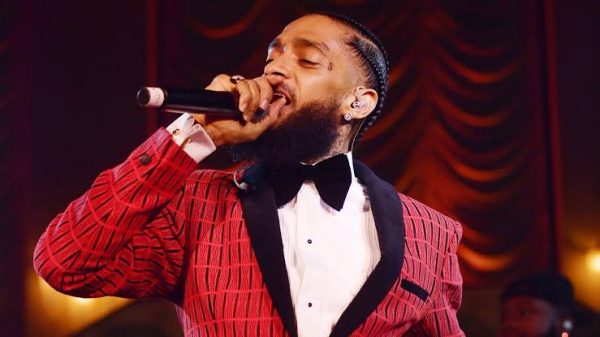 Rihanna, Mary J Blige, Nipsey Hussle, Tyler Perry and the ‘Exonerated Five” dotted the BET awards ceremony with special iconic moments.
The 2019 edition of the award which celebrates black people in film, music and arts, was held at the Microsoft Theatre in California. 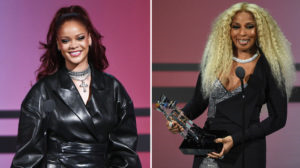 News Agency of Nigeria reports that the award committee set a solemn tone with a blue carpet in honour of late rapper, Nipsey Hussle, who had performed at the BET in 2018.
Hussle was killed in March outside of his Marathon clothing store in Los Angeles. “The marathon continues” was a common refrain on the carpet.
Continuing the honour train, Rihanna took the stage to present Mary J. Blige with the BET Lifetime Achievement Award.
Hailing the legendary singer for her style and sound, Rihanna also made mention of Blige’s history-making two Oscar nominations in the same year, for best actress and original song for “Mudbound”.
Accepting the trophy, Blige told Rihanna, “I don’t think you know how much I love and respect you. I’m a huge fan and you inspire me right back”.
In the same manner, actress Taraji P. Henson paid tribute to Tyler Perry, thanking him for paying her worth and assisting on her journey to acting success.
Perry, who was presented the ‘Ultimate Icon’ award by Henson, responded in a rousing speech where he explained that he saw the need to create opportunities for himself.
He said: “When I built my studio, I built it in a neighborhood that is one of the poorest black neighborhoods in Atlanta.
“So that young black kids could see that a black man did that, and they can do it too. I was trying to help somebody cross.”
One of the most moving moments during the BET Awards this year, held Sunday night in Los Angeles, came when The Exonerated Five, formerly known as the Central Park Five took the stage.
The stories of Korey Wise, Kevin Richardson, Yusef Salaam, Raymond Santana and Antron McCray were depicted in the critically-acclaimed Netflix series, ‘When They See Us’, directed by Ava DuVernay.
The Exonerated Five served six to 15 years for the rape and assault of Trish Meili, who was jogging in New York City’s Central Park in April 1989.
Their convictions were later vacated when serial rapist and murderer Matias Reyes confessed to the rape and assault, with DNA evidence corroborating his story.
They received a $41 million settlement from New York City in 2014 for their wrongful conviction.
BET host, Regina Hall, said it was her “honor” to introduce the men, who quickly received a standing ovation from the celebrity crowd, which included Rihanna, Tyler Perry, Cardi B, The Migos and more.
NAN reports that the men were there to remind the world of their stories and deliver an important message. They also introduced performer, H. E. R. who they said was also “serious about telling her truth”.
The BET Awards also included performances by Lil Nas X with Billy Ray Cyrus, Migos, Cardi B, who opened the awards ceremony, and newcomer, Lizzo.