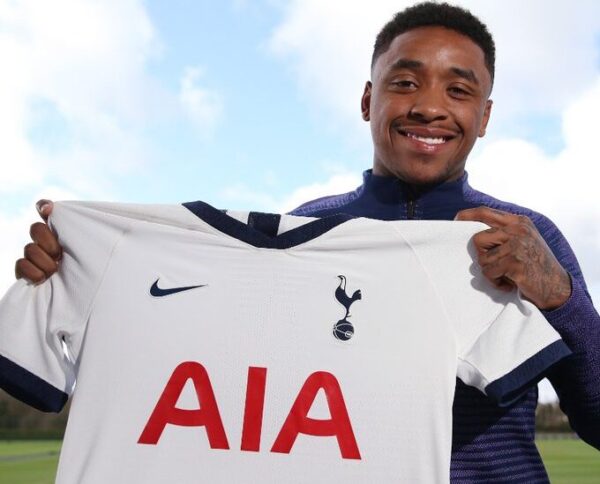 Tottenham have announced the signing of Holland forward Steven Bergwijn from PSV Eindhoven.
The 22-year-old has hit 29 goals in 112 Eredivisie appearances having progressed through the ranks.
With Harry Kane injured, Spurs head coach Jose Mourinho was keen to add further attacking options to his ranks and Bergwijn has signed a contract until 2025 and moves to the Tottenham Hotspur Stadium for an undisclosed fee.
“We are delighted to announce the signing of Steven Bergwijn from Eredivisie side PSV Eindhoven,” a club statement on the Tottenham website read.
“Steven has signed a contract with the Club that will run until 2025 and will wear the number 23 shirt.
“The Netherlands international made his first team debut for PSV at the age of 17 and went on to establish himself as a regular in the team during the 2016/17 season where he made 33 appearances.
“The versatile attacking midfielder has been a member of three Eredivisie title-winning squads at Philips Stadion, making 149 appearances in total and scoring 31 goals, including a career best 15 last season. So far this campaign he has registered six goals in 29 appearances.
“Having made his senior international debut in October, 2018, the 22-year-old has collected nine international caps for the Netherlands to date.”
Bergwijn follows in the footsteps of Giovani Lo Celso, whose loan move to Tottenham was made permanent on Monday. (John Walton/PA)
Bergwijn becomes Tottenham’s second permanent signing of the January window after the club converted Giovani Lo Celso’s loan move into a full-time deal on Monday.
Last season’s beaten Champions League finalists have also added Benfica midfielder Gedson Fernandes on loan, while Christian Eriksen has departed for Inter Milan.
In Kane’s absence, Tottenham continue to be linked with a late move to bring in another striker with Chelsea’s Olivier Giroud reportedly the latest target.