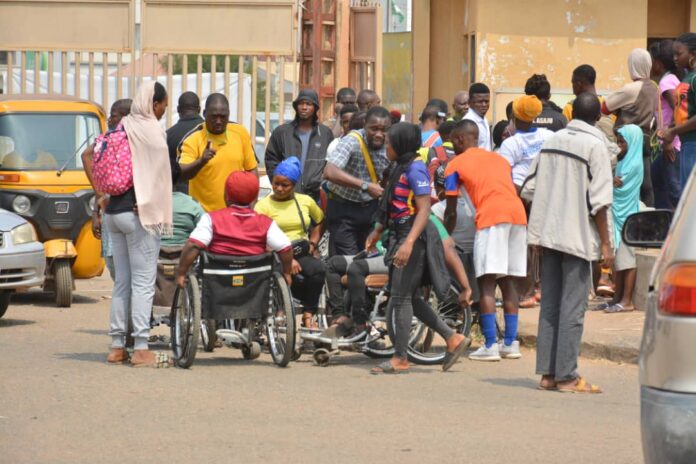 Aggrieved athletes from the 16 local government areas of Kwara State on Monday staged a protest to demand better welfare as 7th Kwara Sports Festival kicked off in Ilorin.
The News Agency of Nigeria reports that the athletes, who barricaded the Taiwo Road entrance of the state stadium complex during the protest, said it was absurd for the local government councils to pay them N500 a day for the duration of the games.
One of the female athletes said: “Look at my eyes, it was punches to it that made it look like this.
“They said they want to pay me N500 a day, for being a boxer, would they be the one to step into the rings?
“Let them bring their children to fight us in the ring and we will take the N500.”
Another official from Irepodun Local Government Area, who pleaded anonymity, said many of the athletes had since returned to their homes because of maltreatment.
The official said: “We have not seen our treasurer and DPM since we arrived Ilorin for the games.
“What they gave us as tea this morning was more or less a hot water than what they called it.
“I don’t even have a kobo to buy a drink not to talk of to buy food.
“Many of our athletes have since returned to their homes because of the poor welfare package at the games.”
Reacting to the development, the state Director of Sports, Malam Tunde Kazeem, said he had addressed the protesters and that the situation was under control.
Kazeem declined further comments though some of the athletes had threatened to disengage from the games.
NAN also gathered that the contingent from all 16 LGAs were being fed by one caterer.
It is reported that N2.5 million had been released for each of the participating LGAs.
The games opened on Monday with the closing ceremony fixed for February 1.