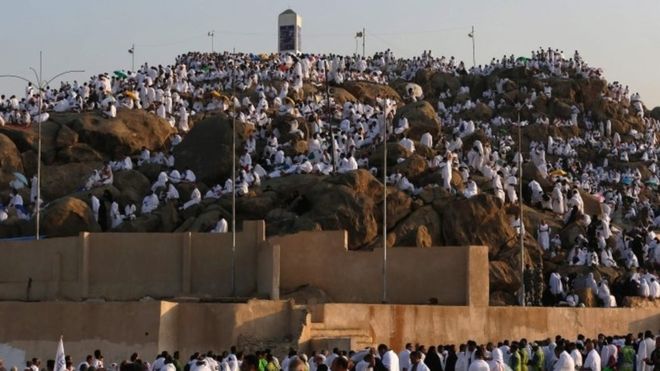 No fewer than 80 Ulamas (clerics) will preach to Nigerian pilgrims on hajj ethics as they join over 1.8 million other pilgrims from across the world in Muna on Friday.
The pilgrims would be in Muna for three days to under go series of hajj rites culminating in Arafat on August 10.
The Coordinator of the National Ulama team, Imam Ahmed Sahad, disclosed this on Friday in Makkah during the 2019 Hajj Pre-Arafat meeting with stakeholders.
The occasion was organised by the National Hajj Commission of Nigeria to brief the public on the journey so far in the course of the 2019 pilgrimage.
According to Sahad, the team has carried out series of  programmes to enlighten the pilgrims, to ensure they keep in tune with the principles of Islam.
In his opening remarks, the acting Chairman of the commission, Alhaji Abdullahi Muhammad, listed Alhaji Abdullahi Abubakar among the clerics.
Muhammad said President Muhammadu Buhari ordered the membership of Abubakar into the team in appreciation of his gesture.
The News Agency of Nigeria reports that 84-year-old Imam of Yelwa central mosque hid about 300 victims of a Jos crisis, thereby saving them from being killed.
Muhammad urged members of the team to enlighten the pilgrims on the ethics of hajj to ensure an acceptable pilgrimage.
He said: “Hajj is multi institutional and needs the support of other stakeholders in the society to succeed.
“I urge you to work as a team, to give the pilgrims teaching that will not confuse them, no scholarly debate, don’t involve the pilgrims beyond their comprehension.
“This is to make sure the pilgrims get value for their money.”
The acting chairman, who said the commission had concluded arrangement for a successful Hajj this year, called on the stakeholders to join hands with it to accomplish the task.
He also called on the pilgrims to tolerate one another in Arafat and imbibe the preaching of the clerics to have a satisfactory pilgrimage.
“There may not be enough space for every pilgrim, therefore, it becomes important that pilgrims must tolerate one another in ensuring they attain acceptable Hajj,” he said.
The Head medical team in the commission, Dr. Ibrahim Kana, advised pilgrims to take adequate water to avoid dehydration and other related challenges.
In his address of welcome, the Nigerian Ambassador to Saudi Arabia, retired Justice Issa Dodo, lauded NAHCON and its staff “for a good job” in Hajj activities and called on them to enhance the tempo.
A member of the National Ulama team, Khadijah Gambo, stressed the need for NAHCON to ensure that pilgrims were enlightened, on the ethics of hajj, three months before pilgrimage to avoid “embarrassing situation.”
The Commissioner in charge of operations in the commission, Alhaji Abdullahi Saleh, said the number of Nigerian pilgrims to Saudi Arabia this year, increased by 15 per cent.
The News Agency of Nigeria reports that many Islamic scholars and top members of staff attended the occasion.