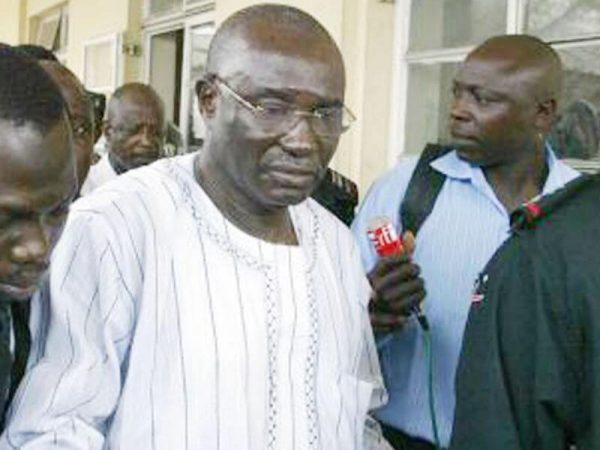 The absence of Fred Ajudua, a lawyer turned businessman at an Ikeja High Court has stalled his criminal trial for allegedly defrauding retired Lt.-Gen. Ishaya Bamaiyi, a former Chief of Army Staff of 8.4 million dollars.
The Economic and Financial Crimes Commission was scheduled to open its case against Ajudua at the court on Wednesday while Bamaiyi, the first prosecution witness, had flown to Lagos from Abuja to testify against Ajudua.
During the proceedings, Olalekan Ojo, the defence counsel for Ajudua, had presented to the prosecution an application letter dated May 21 for an adjournment.
Ojo informed the court that the defendant was still at an India hospital to treat an undisclosed ailment.
He said: “We have attached to the application the latest medical report.  The defendant will be in India till the end of June and I have no other information to the contrary.”
Seidu Atteh, the lead prosecuting counsel for the EFCC, objected to Ojo’s request for a new adjournment date, insisting that the trial should continue on the previously scheduled date of May 28.
The EFCC prosecutor also requested that Ajudua should pay Bamaiyi’s flight expenses.
Atteh said: “We will be asking for the previously adjourned date of May 28 for us to do our findings in this matter.
“We only became aware last night that the defendant will not be in court.
“The defendant should be made to pay the costs of the witness who flew in all the way from Abuja.”
The defence did not object to the prosecution’s request that Bamaiyi’s flight expenses should be paid.
He said: “It is fair and just as we did not get across to him early enough.”
In her ruling, Justice Josephine Oyefeso ordered that Ajudua should bear the expenses of Bamaiyi and also acceded to the prosecution’s request and adjourned case until May 28 for trial.
NAN reports that the court had on February 27 granted Ajudua permission to travel to India for medical treatment.
Ajudua allegedly defrauded the former Chief of Army Staff of $8.4million while they were both in custody in Kirikiri Prisons in 2004.
Bamaiyi was in custody for treason while Ajudua was in custody for fraud related offences.
Ajudua alongside some accomplices, had allegedly approached Bamaiyi and convinced him that he could hire the legal services of Chief Afe Babalola (SAN) to help secure his freedom with Bamaiyi giving Ajudua 8.4 million dollars as legal fees.
When the alleged fraud came to light, the law chambers of Afe Babalola and Co. issued a disclaimer disassociating itself from the case.