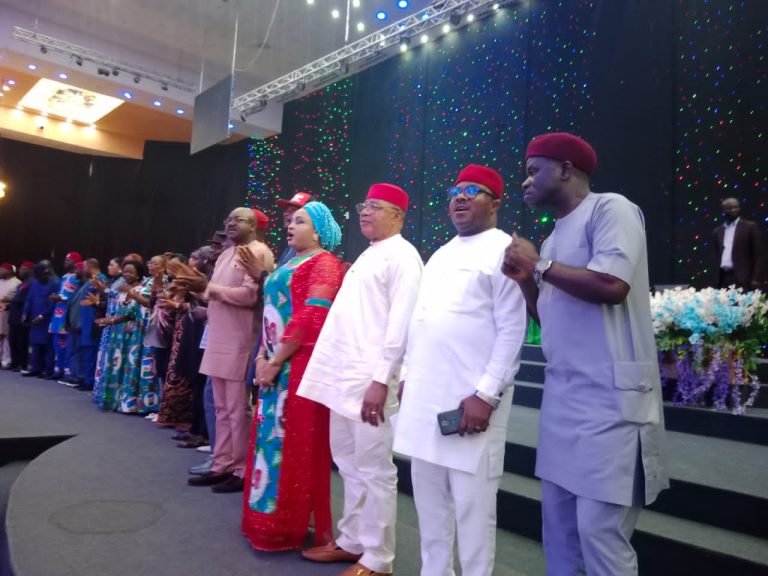 The All Progressives Congress in Ebonyi State has inaugurated its State Campaign Council to drive the party to victory in the 2023 general election.

The inauguration of the State Campaign Council was performed on Saturday amid a lot of singing and dancing.

The Campaign Council has Governor David Umahi as the Chairman and the Deputy Governor, Eric Kelechi Igwe, as the First Vice Chairman, while the Director-General is Chief Austin Umahi.

For the Women Directorate of the Council, the Chairman is the Wife of the Governor, Chief Rachael Umahi; with First Deputy Chairman as the wife of the Deputy Governor, Ethel Nnenna Igwe.

The deputy governorship candidate, Princess Patricia Obila, was also named as the Fourth Deputy Chairman for the Women Directorate, while the wife of the former Deputy Governor, Catherine Ogbu, is the Director-General.

The Council also has all the party’s candidates at all levels of representation as members.

Performing the inauguration on Saturday in Abakaliki, Governor Umahi commended APC members and teeming supporters for the unprecedented solidarity given to the party’s presidential flag bearer, Asiwaju Ahmed Bola Tinubu, during his recent campaign visit to the State.

He expressed satisfaction with the outing, and gave special appreciation to the women for surpassing expectations in massively mobilising their members for the rally.

Governor Umahi further made a case for enhanced appointment slots for the women in the incoming administration in the State.

He said: “Ebonyi State is the envy of other States.

“Nobody can controvert the fact that on the 24th, the Women Campaign Organisation mobilised more than the men.

“And when we were trying to give women 40 per cent, the men were protesting, but next time we will give the women 60 per cent, and the men 40.

“Mr. Incoming Governor, if the women are going to do this job, if they are taking 60 per cent of votes, they must take 60 per cent appointments, in line with the party’s reward system.

“We have to agree on that.”

Umahi charged the Council members to leave no stone unturned toward securing victory for the party in 2023.

He tasked the women to organise zonal and state campaign rallies, while there would be combined rallies by both party men and women in all the local government areas of the State.

In his remarks, the APC South East Zonal Secretary, Itapa Azuobu, urged all the Committee members to retire immediately to their wards and polling units to begin campaign ahead of the elections.

Others who spoke at the event, including the APC State Chairman, Chief Stanley Okoro Emegha, and the member representing Ikwo/Ezza South Federal Constituency, Comrade Chinedu Ogah, called on the party’s supporters to rally round the candidates to secure victory at all levels, devoid of reservations.

“The task ahead of us is to ensure that all our candidates win from the national to State House of Assembly,” Emegha reiterated.