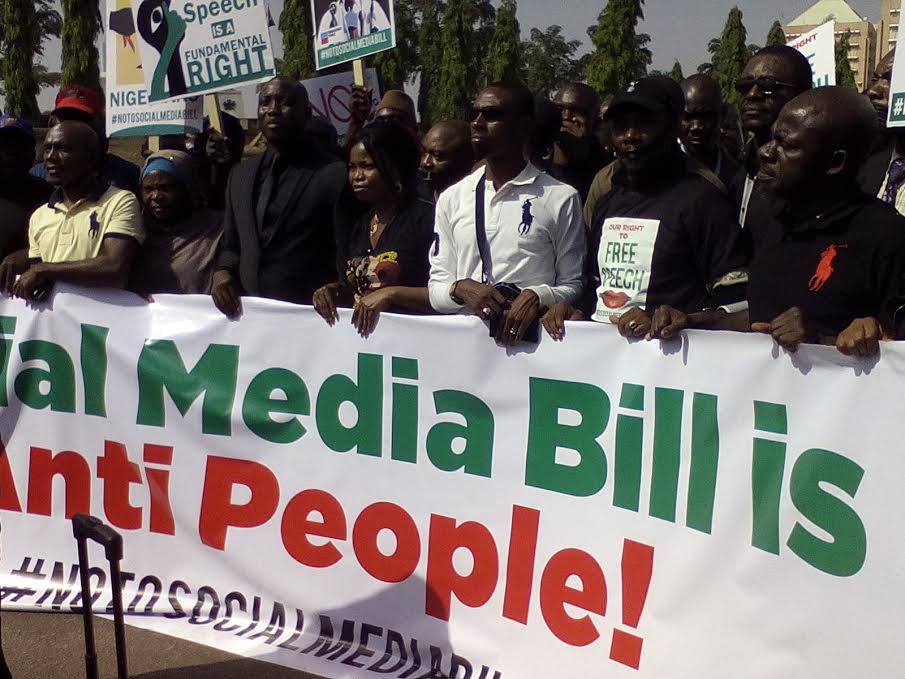 The Federal Ministry of Justice and the Law Reform Commission have kicked against the passage of the Frivolous Petition Bill, popularly referred to as the “Anti-Social Media Bill”.
They made their positions known on Monday in Abuja, while making presentations at the Public Hearing on the bill.
The public hearing was organised by the Senate Committee on Judiciary, Human Rights and Legal Matters.
Patrick Etta-Oyong, an Assistant Director, Legal Drafting Department, Ministry of Justice, who represented the ministry, said that the bill was “not justifiable in a democratic setting”.
Etta-Oyong said the bill, if passed, would also contravene the African Charter on Human and People’s Rights, which Nigeria was a signatory to and approved by the National Assembly.
The official added that all the issues which the bill seeks to be regulated had already been provided for in the constitution and as such, would only be a repetition.
He said: “What the bill seeks to prohibit is being regulated by the law of defamation in Section 375 of the Criminal Code.
“It is our view that there is no need for this bill to be passed in the form it is.
“Even if you expunge the affidavit, there is some form of stress on the citizens, who are mainly illiterates.”
Etta-Oyong pointed out that an affidavit in itself was not an evidence that a petition was factual.
Also speaking, Chibueze Okorie, who represented the Law reform Commission, also agreed that the bill was unnecessary.
Okorie said the commission had looked at the provisions of the bill and compared it to already existing laws and found that it was unnecessary.
He said words such as investigation, inquest and inquiry used in the bill were open ended, which implied that even oral statement must be accompanied by an affidavit.
The official said with such vague provision, internal investigation by government agencies may be hampered as persons would no longer be able to report crimes or corruption within the office.
He said: “The requirement of going to a High Court is erroneous.
“Whistle blowing will be seriously hampered by the bill and if this government is promoting anti-corruption, the people must be encouraged to report.
“It is within the discretion of enforcement agencies to know if a complaint is frivolous or not.
“People should be allowed to make their report and leave the agencies to use their discretion to know if the laws are frivolous or not.
“The position of the commission is that it (bill) inhibits the discretion of law enforcement agencies.
“If we feel the law enforcement agencies are not doing their job, we should look at ways to make them do their job.”
Okorie said the bill was unnecessary as other existing laws had already provided for the scenarios.
An online publisher, Anthony Eyilebo, argued in the same vein, and stressed that a lot of Nigerians were also against the bill.
Eyilebo said that more than 15 million Nigerians on social media had shared the refrain: SayNoToAntiSocialMediaBill, to register their displeasure with the bill.
Other online activists who spoke corroborated the stance of earlier speakers and kicked against the bill.
However, the Office of the Chief Justice of Nigeria supported certain aspects of the bill.
The CJN, represented by Justice Clara Ogunbiyi, a Justice of the Supreme Court, said the intent of the bill was to make it mandatory for investigations and inquest to be accompanied by affidavit.
Ogunbiyi said frivolous petitions had become the order of the day, stressing that the freedom of expression as contained in the constitution, must be within bounds.
She, therefore, lauded the bill for attempting to create the bounds to the freedom of expression, adding that it was usually difficult to fight a faceless person or petitioner.
She said: “The bill is laudable because frivolous connotes unseriousness.
“It is not within the contemplation of the constitution.
“The measure is to curb excesses, but not that it will serve as a platform for the denial to information or do away with checks or accountability of the arms of government.
“Whatever information that is disseminated must be identifiable and genuine to safeguard the public.
“The most difficult war to fight is against a faceless person.
“There are great advantages of this bill.”
Meanwhile, the Chairman of the committee, Senator David Umoru, urged all those who made verbal presentations to send same in writing to the committee.
Umoru said the public hearing would provide the National Assembly the avenue to get public comments, adding that the public hearing underscored the importance the senate attached to the yearnings of Nigerians.
The News Agency of Nigeria recalls the Frivolous Petition Bill was read a second time on December 2, 2015, and was passed to the committee for further legislative action.
NAN.