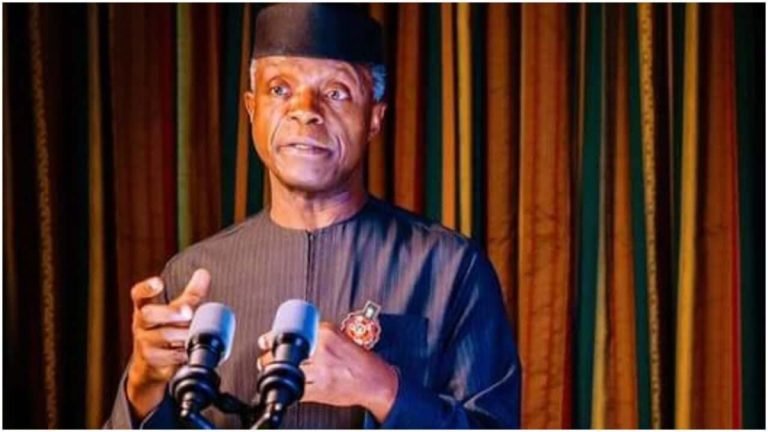 There was palpable shock as Vice-President Yemi Osinbajo (SAN), failed to acknowledge the presidential candidate of the All Progressives Congress for the 2023 elections, Asiwaju Bola Ahmed Tinubu, and the Lagos State Governor, Babajide Sanwo-Olu, in the protocol ahead of his speech at the funeral of the mother of the Ondo State Governor, Rotimi Akeredolu.

The funeral service at which Osinbajo spoke was held at St. Andrew’s Anglican Church in Owo in Ondo State.

Osinbajo acknowledged the presence of former Governor of Ekiti State, Dr. Kayode Fayemi; and Governor of Ogun State, Dapo Abiodun, among others.

However, Osinbajo’s omission stirred up a little commotion in the church as there were several side talks.

Shortly into his speech, the former Lagos State Attorney-General and Commissioner for Justice was prompted by his aide, who dropped a piece of paper to remind his boss of the presence of Tinubu, who was actually in the front seat.

Indeed, Osinbajo sat beside Tinubu before getting up to deliver his speech.

He then said: “Before I go on, I have made a very big error.

“I have left out the presidential candidate of our great party, the APC, Asiwaju Bola Ahmed Tinubu, the Emi lokan.

“We were sitting right next to each other.

“He was sitting right next to me.

“Not just sitting right next to me, but right in front of me, but I honour you and welcome you to this event.”