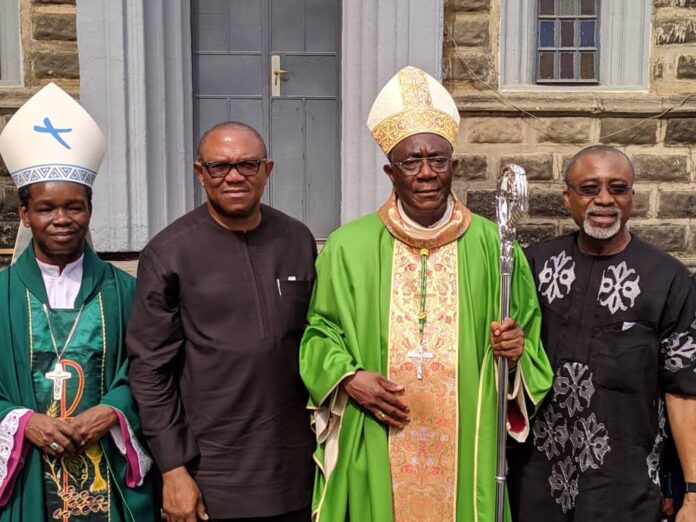 The newly consecrated Bishop of the Catholic Diocese of Aba, Most Rev. Augustine Echema, has called on Nigerians in all walks of life to emulate former Anambra State Governor, Peter Obi.
The cleric spoke on Sunday at Christ the King Catholic Church, Aba, during his first mass as the Bishop of the Diocese.
Echema, who revealed that he was always awed by Obi’s simplicity and humility, said he remained one politician he wished others should emulate in politics, in the simplicity of his life and constant efforts to enrich humanity.
“Not only his life as a politician, I have observed him closely and can say that he lives good Christian life, which is sadly missing among many politicians,” Bishop Echema said.
He expressed confidence that if Obi, the Vice Presidential Candidate of the Peoples Democratic Party during the 2019 polls, is given the opportunity of service, “humanity will benefit from his selflessness and great understanding of leadership and what it entails.”
In his own remarks, the Papal Nuncio to Trinidad and Tobago, Archbishop Fortunatus Nwachukwu, thanked the duo of Obi and Senator Enyinnaya Abaribe for their faithfulness to the right cause.
Nwachukwu said Obi had remained a reference point for good governance.
Speaking to the press after the event, Obi, who was in the company of Abaribe, said Nigeria was at cross roads “due to cumulative years of failed leadership”.
Besides electing those who understand leadership, Obi also called on Christians to pray to God to soften the hearts of leaders so that they will realise that public money is specifically for public service.
X-raying the state of the nation, Obi described as unacceptable the level of poverty and unemployment in Nigeria.
Explaining further, he said no leader floats jobs but jobs are created when good leaders take over and through good policies and commitment expand the industrial base of the country.