Drama as APC gubernatorial candidate in Enugu, counsel stay away from tribunal 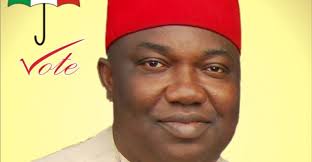 There was a mild drama at the Enugu State Governorship Election Petitions Tribunal on Wednesday following the absence of the All Progressives Congress governorship candidate and his lawyer.

The News Agency of Nigeria reports that the petitioner, Chief Okey Ezea, and his counsel, George Ogara, were absent as the tribunal reopened the case against the election of Governor Ifeanyi Ugwuanyi.

The tribunal had on July 17 dismissed the forensic report on the election materials brought by Ezea, closed his case and slated Wednesday to reopen Ugwuanyi’s case as the first respondent.

A representative of the petitioner’s counsel, U.C. Kalu, told the tribunal that he stood in brief for Ogara as the petitioner travelled for his in-law’s burial and sought for an adjournment.

The counsel to the respondent, Ogochukwu Onyekwuluje, however, argued that since Kalu announced his appearance for the petitioner, the law required him to carry on with the case.

Onyekwuluje said there was no cogent reason why Ezea and Ogara absconded from the tribunal.

He said: “Once a counsel announces his appearance in the court, he is fully mandated to carry on with the case.

“The petitioner ought to have stated the reason for his absence. I sense a deliberate act by the petitioner and his counsel not to appear before this tribunal.”

The Chairman of the tribunal, Justice A.G. Kuwaffa, held that there must be a cogent, justifiable and convincing reason for a counsel to be absent and rejected the adjournment prayer.

Meanwhile, the newly appointed Enugu State Commissioner for Water Resources, Charles Egumgbe, appeared before the tribunal for cross examination on his conduct during the April 11 governorship election.

Egumgbe told the tribunal that he was the Peoples Democratic Party campaign manager and Ugwuanyi’s agent during the election.

According to him, there was no violence, electoral malpractice or misconduct as alleged by the APC candidate.

However, Kalu refused to cross-examine Egumgbe, claiming to be an errand boy and not prepared to go on with the matter.

The tribunal adjourned the matter till August 18 for adoption of written addresses.