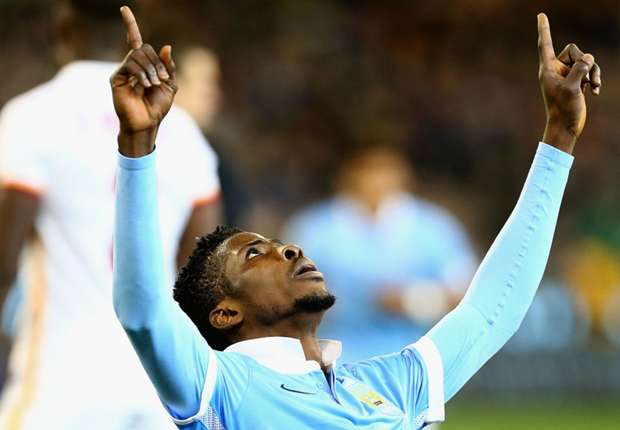 Nigerian youngster, Kelechi Iheanacho, restored hope for Manchester City as they held Celtic to a 1-1 draw at home in their final Champions League group game.
The two sides went into the match knowing that they would finish second and bottom of Group C respectively and Iheanacho’s equaliser after an early Patrick Roberts opener ensured that the spoils were shared for the second time between the two sides this season.
The reverse fixture in September saw Celtic score their fastest Champions League goal of all time, and they almost matched that on Tuesday evening when Tom Rogic stung the palms of Willy Caballero after just three minutes following a defensive mix-up in a Man City side showing nine changes.
Instead, the visitors were forced to wait until the fourth minute to break the deadlock this time around when City loanee, Roberts, skipped past Gael Clichy on the right flank before driving into the box and firing past the keeper to put his parent club behind.
The goal means that City have now kept just one clean sheet in their last 16 outings in all competitions, but just as they responded within eight minutes on their way to coming from behind on three separate occasions in the reverse meeting, they quickly found an equaliser again in Manchester.
Iheanacho was named in the starting lineup ahead of Sergio Aguero following the Argentine’s late red card at the weekend and he justified the decision with his first chance when he beat Craig Gordon having been slipped in by Nolito.
It was the striker’s 13th goal in 18 starts for City, and he nearly added a second within three minutes when Fernando, Nolito and Pablo Zabaleta combined to find him, but this time Iheanacho’s effort swerved wide of the target.
Dembele came close again shortly before the half-hour mark when he got his head to an Emilio Izaguirre cross, but he couldn’t generate enough power on his effort to trouble Caballero.
It was the two strikers who were looking the most like scoring the game’s third goal, and Iheanacho was the next to threaten with a clever flick from Bacary Sagna’s cross that Gordon did well to claw away.
Celtic were left feeling aggrieved on their way in for half time, though, as Roberts saw a strong penalty shout turned down right on the stroke of the interval after being pulled back by Clichy just inside the area.
City did have the ball in the back of the net once again with a little over 20 minutes remaining when Nolito turned home a Jesus Navas cross at the back post following a blistering counter-attack, but the linesman’s flag cut their celebrations short.
The best chance of the second half arrived with only eight minutes remaining when Mackay-Steven broke in behind the defence, but Caballero stood up well and got a strong hand to the ball to turn it past the post.
City have also won just four of their last 14 games in all competitions and end the group as runners-up, six points behind Barcelona.
Celtic, meanwhile, finish bottom of Group C but have now only lost one of their last 10 matches in all competitions and are unbeaten in 10 on the road.