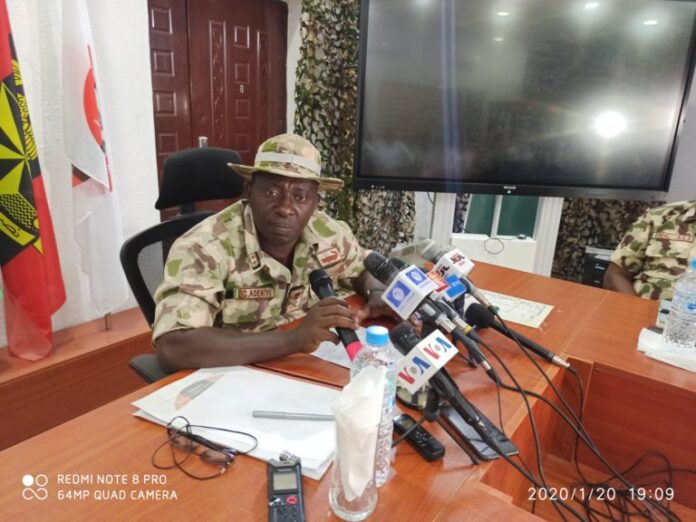 Major General Olusegun Adeniyi, Theatre Commander, Operation Lafiya Dole, has cautioned motorists against stopping at irregular security checkpoint on the Maiduguri-Damaturu Road.
Adeniyi, who disclosed this on Tuesday in Maiduguri, said intelligence reports indicated that Boko Haram were mounting road blocks and attacking motorist on the road.
He listed the designated checkpoints to include Njimtilo, Auno, Jakana, Ngamdu and Kukareta.
Adeniyi said the road was secure as the military intensified patrol and deployed additional personnel to guarantee safety of road users.
According to him, the new measures had denied the insurgents freedom to attack commuters as well as villages along the highway.
He said: “The problem is that Boko Haram dressed in Nigeria Army stolen uniforms, having painted Hilux in Nigeria Army special camouflage colours, stop some vehicles and abduct innocent Nigerians.
“So between Maiduguri and Damaturu, I have ordered that no checking of persons except at recognised checkpoint inside Auno, Jakana, Minok, Banishaik, Ngamdu, Kukareta.
“Those checkpoints have been there for years and they do not even check individuals, they just make sure Boko Haram do not sneak terrorists and IED-laden vehicles into the two cities.
“So if anybody is being asked to stop in between this towns, he should be very wary.
“A lot of soldiers and other security personnel are on that road 24 hours.”
Adeniyi said the command had launched several military operations along the road to route out the insurgents hibernating around the highway to cause havoc.
He said: “Other military operations were carried out on the road and several kilometers away from the road.
“More resources are being put on that road because we realise how vital that road is to all Nigerians.”
The theatre commander said the insurgents had adopted the ISIS style of winning the minds and heart of the civil populace by not attacking them in most cases with a view to set up a caliphate.
He said: “When they enter villages, they will tell them (people) not to run, that they should cool down that they are not there to harm them.
“They are doing this in hope that they are going to form whatever geographical entity that also run a fake state like ISIS.”
On effort put in place to rescue the abducted victims, Adeniyi said massive operations were currently ongoing across the northeast to decimate the terrorist and rescue captured victims.
He said: “Everyday, there are military operations throughout the North East.
“Except Boko Haram will take these people out of Nigeria, our military operations will surely reach wherever they are and by God’s grace, we will rescue them.
“I am assuring Nigerians that we will not relent in our effort to make sure we get to everywhere.
“We just left Mandara mountains and we know the number we rescued.”