The governorship candidate of the All Progressives Congress in Lagos State, Babajide Sanwo-olu and his running mate, Dr Obafemi Hamzat, on Thursday stormed Ikorodu area of the state for a mega-rally, assuring residents of more development in the area if elected.
The duo, alongside party chieftains in the state and other candidates contesting in the upcoming elections, addressed a large crowd of supporters at the ferry jetty in Ikorodu.
Sanwo-olu told the crowd that Ikorodu is an important part of the state which would attract government focus and infrastructure development if he becomes governor, urging them to give him their votes.
He said: “We would continue to develop infrastructure, education, build stadium, roads and pay compensation.”
He promised that he would ensure that the Isawo-Agric and Igbogbo- Ebute roads were constructed and compensation paid to owners of houses destroyed because of the construction.
Hamzat, who also addressed the crowd, asked for their support and reassured the people that they would keep their promises.
The APC chairman in Lagos, Alhaji Babatunde Balogun, said that the party had embarked on many projects to better the life of residents of the state and urged also electorate to come en masse and vote for the party for the forthcoming elections.
He appealed to them to vote for all APC candidates from the Presidential to Governorship and state assembly and national Assembly elections.
He said: “As you can see, APC is a progressive party and our mandate is to ensure everybody enjoys the dividend of democracy;  go out and vote for candidates of APC in the coming election.” 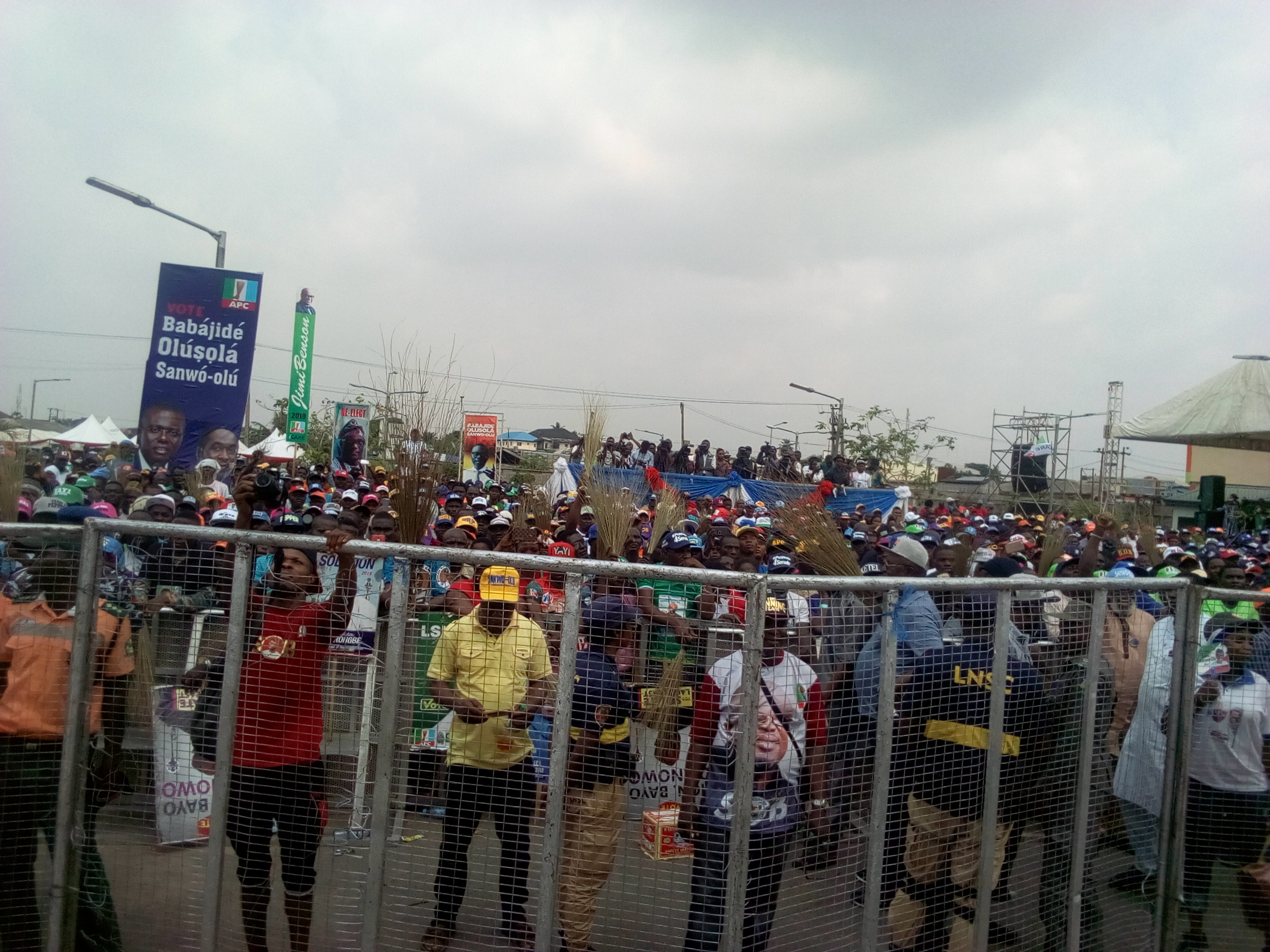 Dr Idiat Adebule, Deputy of Lagos State, said there was no doubt that the party, at the federal level, had, in the last three and a half years, done a lot of infrastructure development, far beyond what the country witnessed in the past.
She said: “As you can see, our party is battle ready for the election; in this party, there is prospect because we are progressive. I am assuring that they are not going to back from the developmental agenda of the party.”
Bayo Osinowo, candidate of the APC for East Senatorial District, said that late Obafemi Awolowo laid the foundation on how true democracy should be practised decades ago and party chieftain, Chief Bola Tinubu, was following his footsteps.
Osinowo said the other leaders of APC were also following the mandate so that everyone could enjoy the dividends of democracy in Nigeria.
He urged the electorate not only to vote for APC, but to defend their votes during the elections.
The Candidate for the House of Assembly, Ikorodu Constituency 1, Sanai Agunbiade, said the party had established itself as one to be reckoned with and he believed it would do well in the area.
The News Agency of Nigeria reports that the party chairman handed over flags to Sanwo-olu and all the candidates of contesting for different positions in the Lagos East Senatorial District.
Popular Fuji musician, Alhaji Wasiu Ayinde, and some members of Nollywood entertained the crowd at the rally.

Rohr must win trophies, not just qualifying for tournaments – Akanni