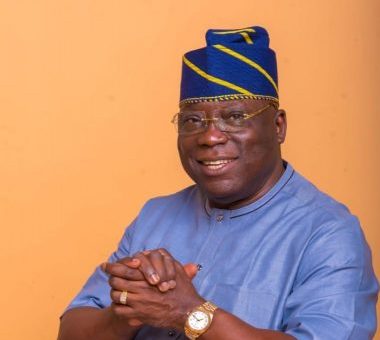 Architect Owodunni Opayemi, an All Progressives Congress (APC) governorship aspirant in Ogun State, has declared that he is in the 2023 gubernatorial race to win and truly return the running of government to the people of the state.

Opayemi, in his official declaration speech released on Tuesday, said the forthcoming primaries of the APC offer leaders and members of the party the historic responsibility to give Ogun State and its citizens a good leader that connects with the people.

The gubernatorial hopeful averred that “there is vacancy in Oke-Mosan in 2023” and urged the party faithful to support his aspiration for Governor’s Office, stressing that a lot more could be done to bring genuine prosperity to people of the state.

He said, “A few days ago, I started the first phase of my journey towards serving the people of Ogun State as their Governor by purchasing, filling and submitting my Nomination and Expression of Interest Forms at the National Secretariat of our great party, the All Progressives Congress (APC).

“I also visited the State Secretariat of our great party, the All Progressives Congress (APC) in Abeokuta, to inform our party leaders and members of my intention to present myself as a candidate for the office of the Governor of Ogun State under the platform of APC in the 2023 elections. Two days ago, in continuation of this process, I was also at the National Headquarters of our party for the screening exercise.

“Today, I am presenting myself to all Ogun State citizens and declaring to offer myself in the service of our people. I know a few things are being done, but there is a lot more that can be done to bring genuine prosperity to our people. Therefore, we need to open the new page in our search for good governance.”

Opayemi expressed optimism that 2023 would berth a significant and positive turnaround for the fortunes of the people of Ogun State.

“The year should open a new page, a new chapter for economic prosperity, and I am prepared to lead in that direction. The key to our people’s happiness and holistic wellbeing is good governance marked by leadership that listens to them, connects with them, shares in their pains and joys,” he said.

He added, “I am a Yoruba man, and our people believe that ‘You cannot shave a person’s head in his absence.’ Thus, you cannot provide good governance when you isolate yourself from the people that you govern. How will you know where the shoe pinches? How will you know about their most pressing needs and demands when they cannot reach you? It is only when you walk barefoot in the sun that you know where the ground is hot.

“I am in this race to win on behalf of the citizens of Ogun State, to take back their government and hand it over to them, and not just for a few. I am running to win and make sure that our people have direct say in how their government works; every project must be connected to the employments of our idle youths and the empowerment of our helpless citizens.

“We need to re-think the future of our children in Ogun State; we need to recreate a future with hope for our abundant talents; we need to redefine the concept of leadership away from the Circus or “fashion show” but as a concrete commitment towards impacting positively on the lives of the greatest number of people and for their greatest happiness.”

Opayemi, who hails from Ikenne-Remo in Ikenne Local Government Area of the state, disclosed that his mission in government will be broadly executed under human capital development, infrastructure development and social services.

He promised to provide quality and purposeful education, encourage industrial and commercial agriculture to drive the state’s economy and empower the citizens with the requisite skills to compete effectively in a changing world.

While vowing to implement an acceptable social welfare scheme that involves improved remuneration for critical stakeholders, pensioners, the aged, and traditional institutions, Opayemi also assured workers of living wage rather than minimum wage.

He said, “Our administration proposes workers’ participation. A government should not wait for when workers strike to negotiate. Organised labour will be called to submit proposals and ideas on how much is or can be the appropriate minimum as a ‘living wage’ for an average worker.

“Such proposals will also include advice on how government can generate the alternative internal income to meet such obligations outside the Federal Allocation, without putting more tax burdens on the citizens.”

The governorship aspirant pledged to run an all-inclusive, participatory and accessible government, adding that he would separate the executive power of the Governor from the political party administration.

“The political party shall have supremacy over matters of the party without or with absolute less interference,” he submitted.

While appealing to the leaders and members of Ogun APC to support him in the party primaries, Opayemi said: “Posterity has bestowed on them the historic responsibility of giving Ogun State and its citizens the good leader who can, who will and who is ready to listen to them, the kind of leader which they deserve in 2023, kindly use your vote wisely.

“There is vacancy in Oke-Mosan in 2023, so I say, “Here I am, Send Me”. I have great assurance that after the primaries, the entire voters in Ogun State also will know and ultimately decide on how to cast their votes wisely for Owodunni Opayemi, the APC candidate in the final ballots in the 2023 elections.”