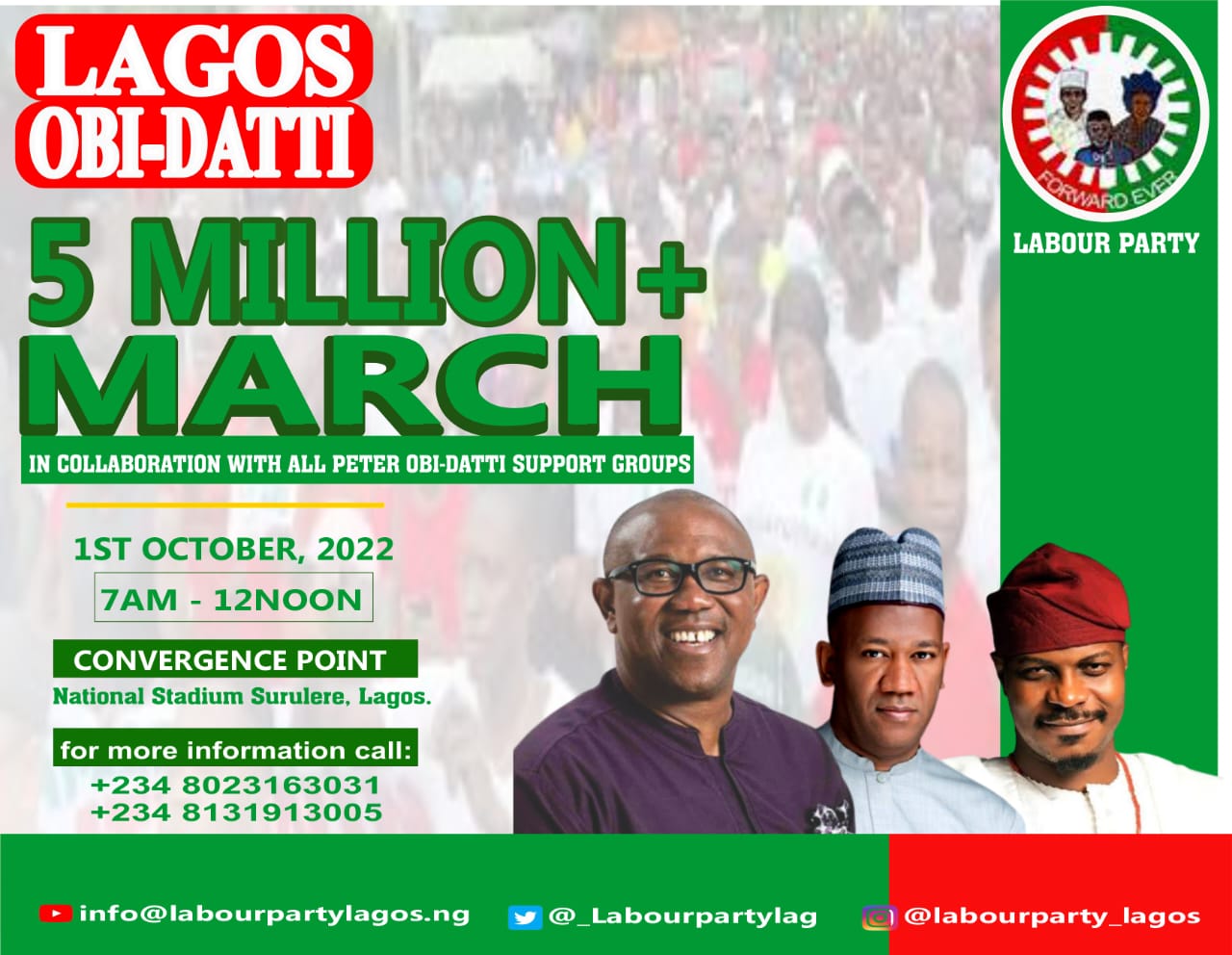 The Director General of the Third Force Movement, Veteran Olawale Okunniyi, has told the All Progressives Congress-led Government at the federal level and Lagos State that it may not be able to stop Nigerians from gathering at the Lekki Tollgate in Lagos if it denies the Labour Party the use of the National Stadium in Lagos for its rally.

Recall that a court had during the week barred the usage of Lekki Tollgate for the rally of the Labour Party on Saturday.

This led to the request by the Labour Party to government for the use of the National Stadium in Lagos.

In a statement on Friday, NC Front, which has adopted Labour Party and its presidential candidate, Peter Obi, for the 2023 elections, said: “Please be notified that the Central Planning Committee of the Lagos 5 Million Man March/Mega Rally has just alerted the leadership of the 3rd Force Movement that in the event that the APC Government refuses to approve the use of the National Stadium, Surulere, Lagos for the peaceful Obi-dient Independence March/Rally holding tomorrow, Saturday, 1st October, 2022, the Organisers may not be able to stop Nigerians from making use of strategic historic venue like Lekki Toll Gate, and Gani Fawehinmi Freedom Park against all odds.

“Consequently, Leaders of the 3rd Force Movement have tried to intervene in this matter but the Federal Ministry of Sports under Mr Sunday Dare is yet to act positively.

“So, all well meaning Nigerians are implored to appeal to the Sport Minister to immediately bow to wisdom and allow the peaceful independence rally of Obi-dient Nigerians hold at the car park of the National Stadium, Surulere, Lagos as requested by the Organisers to avoid unintended jam in Lagos tomorrow.

“Finally, We as leaders of conscience in the Nigerian Civil Society and as Vanguard and  Veterans of the assembly of the Nigerian peoples and masses, hereby wish to assure the Nigerian public that the Lagos independence march and the mega rally is planned to be very peaceful and orderly all things being equal, so government should avoid tacit instigation of confusion.

“This notwithstanding, the Organisers have assured us that the historic March and Mega Rally will hold as scheduled and announced tomorrow, commencing from 7am and all Obi-dient Citizens of Nigeria are expected to turn out in large numbers.

“Further details about the itinerary and schedule of the march and rally are expected to be released by 7pm this evening.”

In the further details, also provided by Okunniyi, the NC Front said: “In support of Obi – Datti 2023 Rescue Mission, all Obi-dient Nigerians and Leaders of Conscience are hereby invited to participate in Obi-Datti Independence Mega Rally/ 5 Million Man March holding on Saturday, October 1st as from 7am.

“Convergence Ground for the Mega Rally is the National Stadium, Surulere, Lagos.

“Please attend punctually to March with Peter Obi to power in 2023. Thanks.