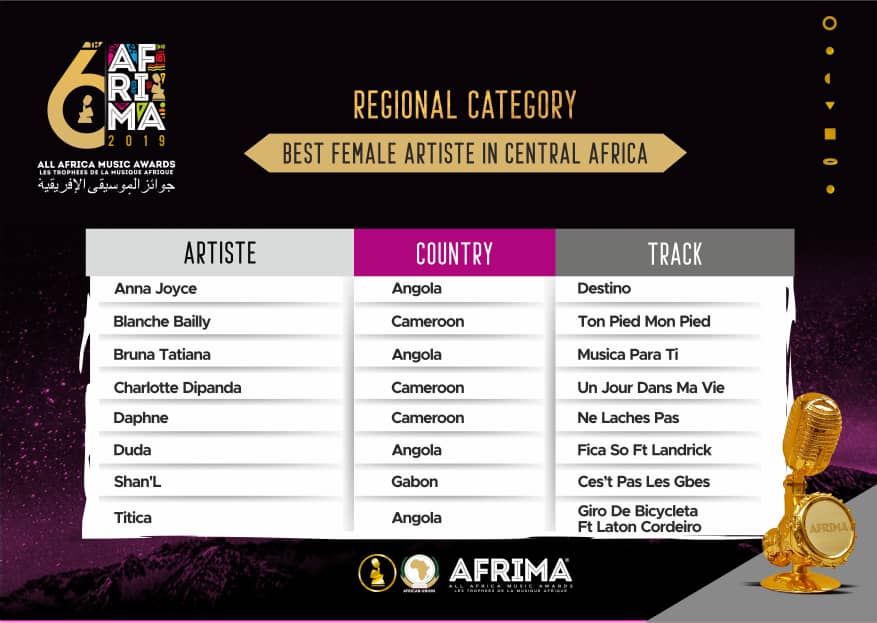 The All Africa Music Awards on Wednesday unveiled Tiwa Savage, Davido, Burna Boy, Simi, Wizkid, Kizz Daniel, Teni, Yemi Alade, Niniola along other international artistes  nominated for  2019 edition of the prestigious award.
This was made public during a press conference held at Eko Hotels and Suites, Victoria Island Lagos by Aderele Niyi, AFRIMA’s Associate Producer.
Niyi said that the nominees that cut across Western, Eastern, Central Southern and Northern Africa were carefully picked after rigorous screenings by a group of professional jury.
She said thatcsome of the criteria used in arriving at the nominees include:  fairness, creativity, excellence, integrity, originality of their music, authenticity which must reveal African concept among other things.
According to her, the world music festival will  hold  between November 21 to  November  23  2019 in a country that will be announced next month.
Niyi said that the event was established to reward and celebrate musical works, talents and creativity around the African continent, while promoting the African cultural heritage.
She said: “The platform is to position Africa as a musical hub for the world as Africans are seen as talented and highly creative.
“This is going to be the 6th edition of AFRIMA and I can say that it has been getting better each year; this year’s edition promises to be a unique one.”
Niyi called for continental support from African leaders in order to enlarge the scope of   the event for more international acceptance.
She also urged music artistes to see the platform as theirs for better exploration.
The News Agency of Nigeria reports that the following were nominated for the best male artistes from   West Africa: Burna boy with his song “Ye”, Davido’s “Wonder Woman”, Kizz Daniel’s “Madu”, Wizkid’s “Fever”.
Other nominated artistes are: King Promise from Ghana; Salif Keita from Mali, Shatta Wale from Ghana, Sidiky Diabate from Mali and late DJ Arafat from Cote d’Ivoire.
The nominees for the female category from Nigeria and their works are: Simi’s “I Dun Care”; Tiwa Savage’s “One”; Teni’s “Case”; Yemi Alade’s “Oh My Gosh”; Niniola’s Bana.
Others are: Aya Nakamura from Mali; Jossey from Cote d’Ivoire; Kanuer Adams from Liberia; Manamba Kante from Guinea and Mzuee from Ghana.
The best male artistes nominated from Central Africa are: C4 Pedro from Angola; Fally Ipupa from Congo; Locko from the Cameroon; and Magasco also from the  Cameroon.
Others are; Maitre Gims from Congo; Rui Orlando from Angola; Niska from  Congo Brazzaville; Salatiel from the  Cameroon and Ya Levis from the  Democratic Republic of Congo.
The best nominsted female artistes from Central Africa are : Anna Joyce from  Angola; Blanche Baily from the Cameroon; and Bruna Tatiana from  Angola.
Others are; Charlotte Dipand also from the Cameroon; Daphine from the Cameroon; Duda from Angola; Shan’l from Gabon and Titica from Angola.
Also, the best male artistes from   North Africa are:  Ahmed Soultan from -Morocco; Aminux from Morocco; Amr Diab from  Egypt; DJ Moh Green from  Algeria; and  Mostafa Hagag Kelso from Egypt.
Others are: Soolking from Algeria; Tamer Hosny from -Egypt and Yann Sine from Morocco.
In the best female categories: Cairokee from Egypt; Kenza Morsfi from  Algeria; Nada Azhari from Morocco; Psychoqueen also from Morocco; Salma Rachid also from Morocco; Sherine from  Egypt and Souhila Ben Lach from Algeria.
For the best male artistes from  Southern Africa are:  AKA, Nasty C, Prince Kaybee, Casper Nyovest, Black Coffee x David Guette, Sjava from South Africa and Jah Prayzah and Winky D from Zimbabwe.
Also, nominees for the best female artistes from   Southern Africa are : Ammara Brown, and  Tamy Moyo from Zimbabwe; Zonke, Kelly Khumalo, Nadia Nakai,  and Sho Madjozi from South Africa; Trina South from Zambia and Chikune from Namibia.
Those nominated for best male artistes from  East Africa are : Black Boy from  Madagascar; Diamond Platinumz from Tanzania; Harmonize also from  Tanzania; and Khaligraph Jones-from Kenya.
Others are: Shyn from Madagascar; WCB Wasafi,  Rayvanny- and  Mbosso from  Tanzania and Nyashinski from  Kenya. 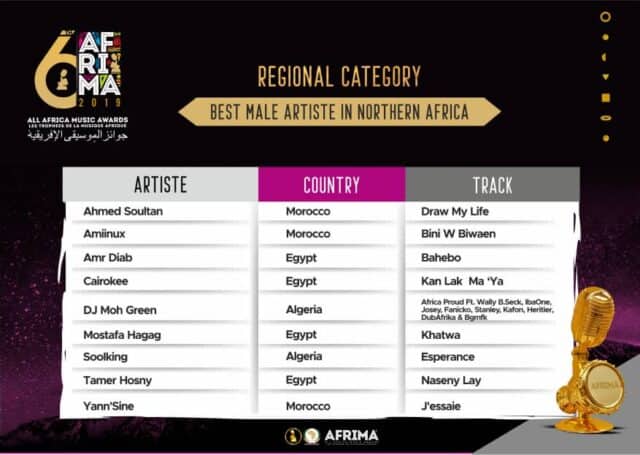 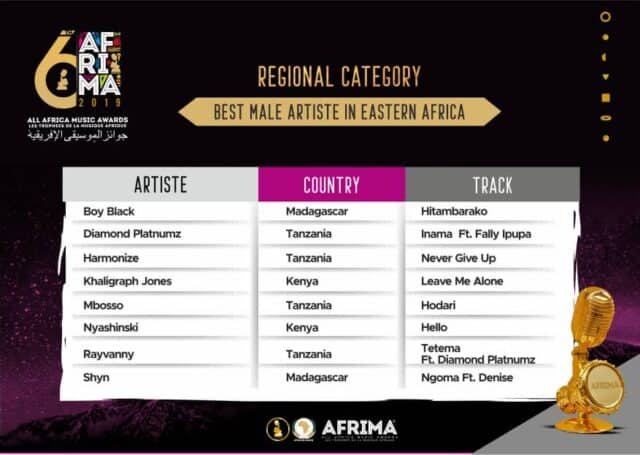 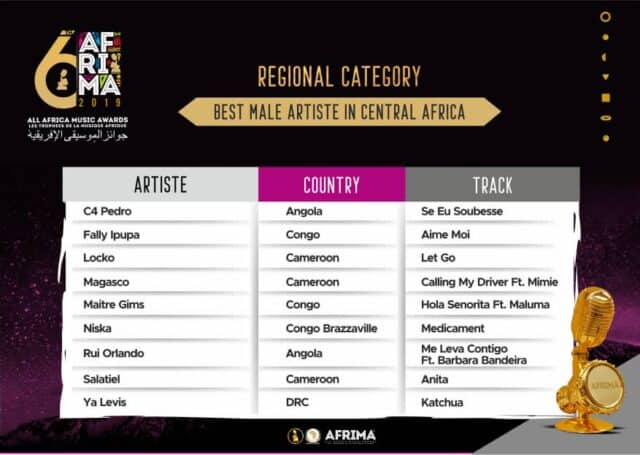 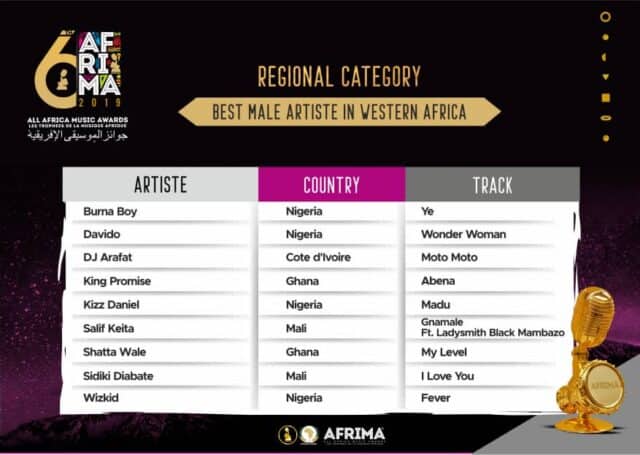 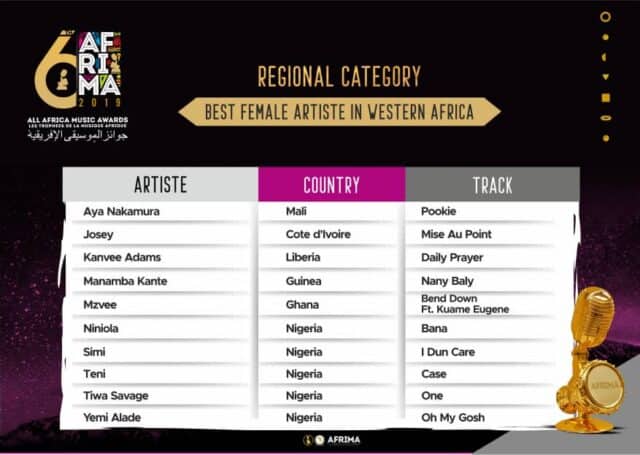 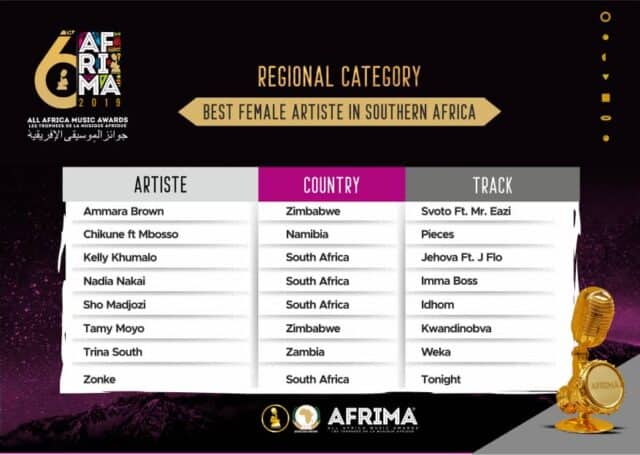 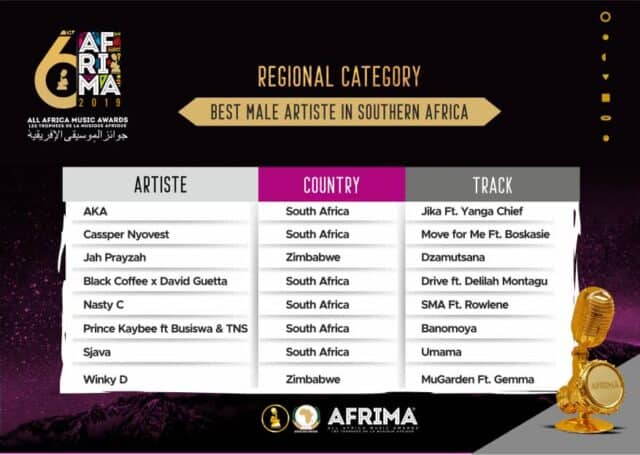 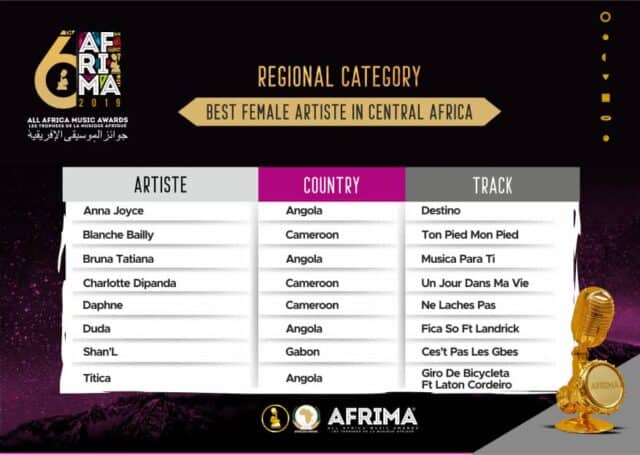 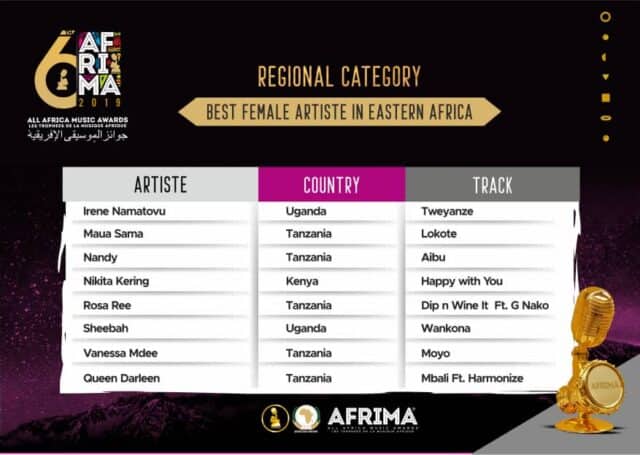 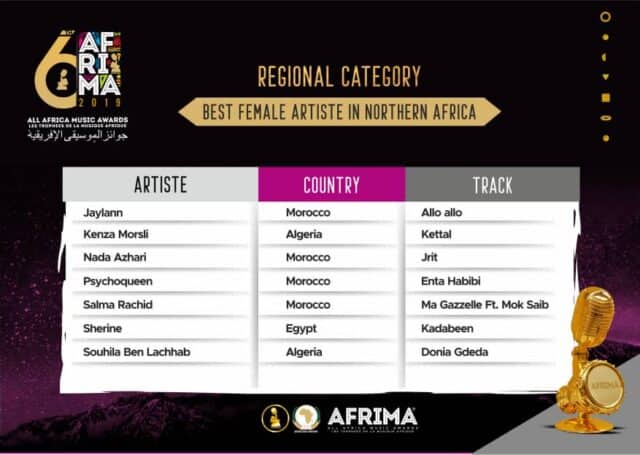