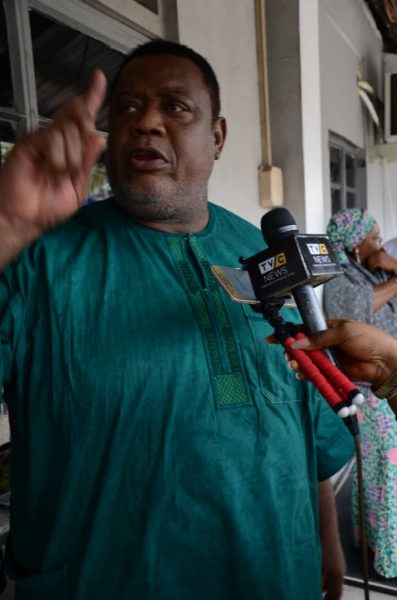 Share
Facebook Twitter LinkedIn Pinterest Email
A renowned Prophet with the Celestial Church of Christ, Alfa and Omega Parish, Cotonou the Capital of Republic of Benin, Peter Ononuju, has been arrested for allegedly defrauding a widow, Oluchi Grace, of N18 million.
The prophet is being quizzed at the Force Criminal Intelligence and Investigations Department, Alagbon Close, Ikoyi, Lagos State.
Ononuju was alleged to have swindled a widow after promising to procured landed property for her in Lekki area of the state.
Parading the suspect at the FCIID office in Alagbon Close, Ikoyi, Commissioner of Police, Dan Okoro, said Ononuju swindled the widow of N18 million, but the victim later discovered that the land belonged to his (prophets’s) ex-wife.
Okoro said: “When the lady discovered the fraud, she reported to my office and I detailed detectives to go after the prophet and he was promptly arrested.”
Okoro said detectives during investigation discovered that the suspect collected N16 million cash and asked the widow to pay the other N2 million into his bank account.
He said it goes to show that the suspect had another intention, adding that the prophet will be charged to court after interrogation.
The FCIID boss warned fraudsters in Nigeria to either repent or face the full wrath of the law, adding that the police was now better equipped to track and trail fraudsters.
He advised people to be wary of those who claimed to be pastors during business transactions, saying they tend to take advantage of the gullible nature of true believers to swindle them of their hard earned money.
Okoro said: “The so-called prophet took advantage of the relationship he has with the widow to swindle her.
“From the beginning, he had the intention of defrauding the woman.
“He started threatening to kill the woman and her children when they discovered that he had swindled them.”
Grace said she has known Ononuju for over two decades and trusted him as a man of God.
She said: “As a man of God, I confided him that I need to buy a property and he told me he knew someone that has one.
“He told me he had seen the one of N12 million and he said I should not pay him the money through the  bank.
“As a man of God, I paid him cash.
“After the N12 million, he started giving me reasons to pay him more money.
“He said he needed money for Omo Onile (land owners) and Certificate of Occupancy from the Lagos State Government.
“I paid him another N6 million.
“He did not give me any document.
“I later discovered that the land in question belongs to his ex-wife who is remarried and based in the US with her husband.
“My son discovered her contact from her Facebook.
“When we contacted her, she told us that she was not selling.
“In fact, she rained abuses on us.
“When the prophet realized that the game is up, he started threatening to kill us.
“That is why I ran to the police.”
In his statement, Ononuju said the transaction he had with the widow was genuine until one of her sons advised her to collect back the money paid.
He said the land was still there, adding that all documents concerning the land is in the hands of Grace.
He said: “I acted as a middle man.
“She came to me to say that I should help look for a land.
“Because of the existing relationship between the two families, I went all out to ensure that I get her a good land, but look at where it has landed me.”
Post Views: 0
Alfa and Omega Parish Celestial Church of Christ Cotonou dan Okoro FCIID Lagos State Oluchi Grace Peter Ononuju
Share. Facebook Twitter Pinterest LinkedIn Tumblr Email